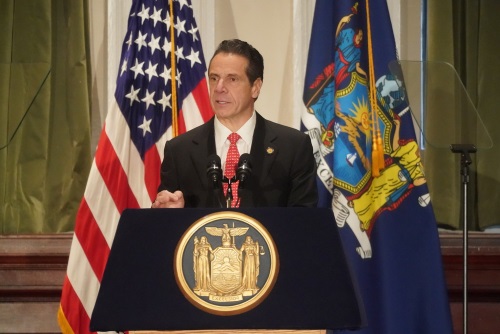 Governor Andrew Cuomo (D) unveiled a plan on January 6 to create the Empire Station Complex in New York City; an interconnected train and subway complex crafted from the current Penn Station rail/subway station and a new parcel of land plus the soon-to-be completed Moynihan Train Hall.

[Above photo via the New York Governor’s Office.]

Critical components of the Empire Station Complex plan include acquiring the property south of Penn Station to allow for the addition of at least eight new underground tracks that will boost Penn Station’s capacity by approximately 40 percent, the governor noted during a speech at an Association for a Better New York meeting.

“This new complex, capable of handling more passengers than ever before, will support the state’s efforts to reduce congestion … so we can get more people out of their cars and into a 21st century mass transit network,” he said.

Amtrak owns the existing Penn Station – which handles 650,000 passengers per day – and will participate in the planning and financing of the Empire Station Complex project.

“Amtrak’s Penn Station is the nation’s busiest transportation facility, the central hub of the Northeast Corridor, and an economic driver for the entire nation. After decades of LIRR [Long Island Rail Road], NJ [New Jersey] Transit, and Amtrak service growth, the [Penn] station’s tracks and platforms are now full for much of the day, limiting all three railroads’ ability to add trains in the future,” noted Anthony Coscia, Amtrak’s chairman, in a statement.

“This forward-thinking plan should serve as a model to the nation as we strive to build 21st century transportation and infrastructure systems,” he added.

Amtrak is already involved in several Penn Station rail infrastructure upgrade initiatives, including a $7.6 million track improvement project that began on January 3 and is expected to be completed by April 17 as well as a $7.2 million joint project with NJ Transit to refresh Penn Station’s Ticketed Waiting Area that should wrap up in June.

Amtrak President and CEO Richard Anderson noted in a statement that Penn Station is the busiest train station in America, handling more than 1,300 train movements every weekday, and that Amtrak has invested more than $150 million aimed at “providing a modern, safe experience to train travelers” by updating its infrastructure in the New York region.

“Modernizing and investing in infrastructure is a continuous process, and Amtrak is committed to making investments towards updating infrastructure when needed,” he said.