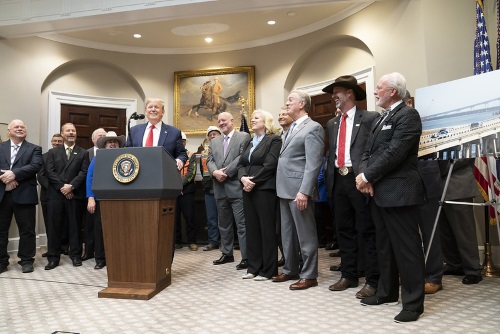 [Above photo from the Office of the White House.]

“In the past, many of America’s most critical infrastructure projects have been tied up and bogged down by an outrageously slow and burdensome federal approval process,” President Trump said during a White House briefing.

“Yet today it can take more than 10 years to get a permit to build a simple road. It is big government at its absolute worst,” he said. “The U.S. will not be able to compete and prosper in the 21st century if we continue to allow a broken and outdated bureaucratic system hold us back from building what we need: roads, airports, schools, everything.”

CEQ Chairman Mary Neumayr added during the briefing that “NEPA is the most litigated area of environmental law” and that the average time for federal agencies to complete environmental impact statements is four and half years.

“Further, for highway projects, it takes seven years on average with many taking more than a decade to complete the environmental review process,” she said.

A paper released by the Brookings Institution last July buttressed that conclusion, noting that “costly environmental review delays” are a major reason why the cost of building one mile of interstate highway tripled between the 1960s and 1980s, adjusted for inflation – validating some of the cost-reduction rationale behind state efforts to assume decision-making and legal responsibilities for meeting NEPA requirements for federal highway projects.

U.S. Department of Transportation Secretary Elaine Chao pointed out during the White House briefing that NEPA reform is “really needed as our nation’s infrastructure is in danger of deterioration and needs to be repaired and rebuilt.” Yet the time required to complete new projects “is now unsustainable,” she added.

“We all care about the environment,” Chao emphasized. “But what we are talking about are cumbersome, unnecessary, overly burdensome, duplicative and outdated regulations. Many have not been modernized in decades.”

Jim Tymon, executive director of the American Association of State Highway and Transportation Officials, noted that state departments of transportation share a “deep responsibility” to care for the environment and the nation’s natural resources, but also feel strongly that there are parts of the environmental review process that could be improved to speed project delivery.

“We are excited that the Administration has initiated this current regulatory review process and we look forward to participating in the final outcome,” he said in a statement.

Yet Rep. Peter DeFazio, D-Ore., chairman of the House of Representatives Committee on Transportation and Infrastructure, said in a statement that that this proposed rulemaking would “gut environmental review” of infrastructure projects.

“NEPA ensures the environmental impacts of a proposed project are examined and that the public has a role in the decision-making process,” he noted. “Not only is removing these requirements a bad idea for public health and our environment, but it will end up costing taxpayers more when projects aren’t built to be resilient. You can be sure I will use all the tools at my disposal to stop this misguided proposal.”

“[NEPA] is the only law that requires the federal government to analyze the environmental impacts of its actions and which allows for public input in federal decision-making,” he explained in a statement. “This proposal is particularly dangerous for frontline and vulnerable communities that have already been disproportionately exposed to pollution, such as air pollutants from nearby highways or legacy pollutants from industrial sites.”

Gina McCarthy, president and CEO of the Natural Resources Defense Council and administrator of the EPA under the Obama administration, also spoke out against the administration’s NEPA proposal saying it “rubberstamps major projects that could harm people’s health and exacerbate climate change.”

However, U.S. Chamber of Commerce CEO Tom Donohue countered in a statement that “too often, the current [NEPA] rules are used as a tool to obstruct important projects, such as highways, bridges, public transit, and even renewable energy projects. Reducing delays and uncertainties associated with infrastructure investment and related projects will allow businesses to plan and invest with confidence while enhancing economic productivity and supporting more and better-paying jobs throughout the country.”

Sen. John Barrasso, R-Wyo., chairman of the Senate’s EPW committee, echoed that point. “These [NEPA] updates will reduce red tape so important infrastructure projects get done better, faster, cheaper, and smarter,” he explained in a statement. “Road and bridge safety projects that take months to build should not take years to permit. These regulatory updates promote safety and still protect America’s air, water, and communities.”

“I applaud the Administration for its efforts to modernize the NEPA process and inject some common sense into environmental reviews,” he said in a statement.

“Streamlining the review of proposed roads, bridges, and other critical infrastructure projects will save the taxpayers money while maintaining necessary protections for the environment, public safety, and human health. I look forward to seeing this long overdue modernization of the NEPA regulations move forward,” Rep. Graves noted.