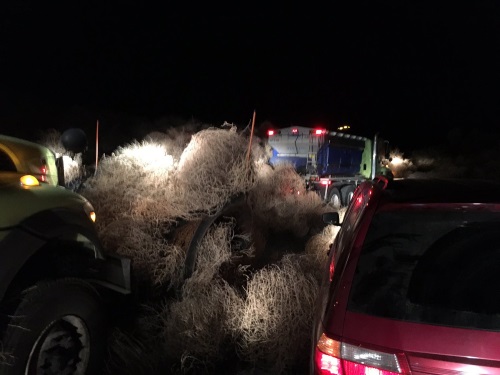 Tumbleweeds stacked 20 to 30 feet high blocked a two-mile section of rural highway in Washington state on New Year’s Eve and into the first day of 2020 – burying five vehicles, trapping others for several hours, and forcing hundreds more to detour or turn around.

Dubbed “Tumblegeddon” by a Washington State Patrol trooper on the scene, it took Washington State Department of Transportation maintenance crews and law enforcement personnel 10 hours to remove the thorny plant debris from the highway – using eight snow plows as part of that effort to re-open the roadways.

According to WSDOT, heavy rain and strong, gusty winds up to 30 mph loosened the tumbleweeds to create this unusual event. Though fencing along the shoulder of the highway caught some of the plants, the agency’s work crews estimated that had all of the tumbleweeds been hauled away, it would’ve taken at least 5,000 truckloads.

“I had tumbleweeds just engulf the plow truck on its sides, on top and in front,” Jason Vandine, a WSDOT maintenance worker, explained in a WSDOT blog post. “The people would try to let us know where their vehicles were so we could try to keep track of what was there and where so we could avoid damaging any property and so we could keep everyone safe.”

He noted that plow operators had to drive under 10 mph to avoid obstacles such as vehicles that were hard to see through the darkness and the debris.

While tumbleweeds aren’t an unusual sight on the east side of Washington State, the sheer size and scope of Tumblegeddon took things to a different level: especially in terms of burying vehicles and closing the highway.

“I’ve worked here for about 20 years and although there are a lot of tumbleweeds blowing out there in the desert, I have never seen that much at once, and that deep,” said Ryan Miller, one of WSDOT’s maintenance supervisors.

Kara Shute, a WSDOT maintenance superintendent for the area, added that she hasn’t seen a tumbleweed storm of such magnitude in 35 years.