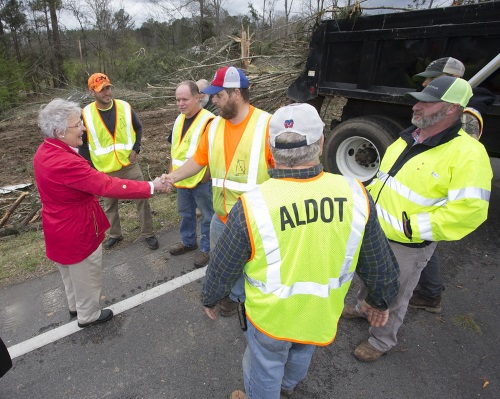 Governor Kay Ivey (R) and the Alabama Department of Transportation awarded a total of $7 million in funding for 31 local road and bridge projects on January 16; monies made available through the state’s Annual Grant Program, created under the Rebuild Alabama Act.

“An investment in our roads and bridges is an investment in the future of Alabama. These $7 million in funds will go a long way in helping communities across the state address various road and bridge projects,” the governor said in a statement, adding that the Rebuild Alabama Act requires the Alabama DOT to establish an annual program setting aside $10 million off the top of the state’s share of new gas tax revenue for local road and bridge projects.

Last March, Gov. Ivey signed into law a measure that would increase the state’s fuel tax by 10 cents per gallon over the next three years, starting with a six-cent-per-gallon hike this year. The fuel tax will then be adjusted up or down with the National Highway Construction Cost Index and could increase up to a penny every two years.

The governor’s office noted that a second award cycle is expected later this year that will award the remaining $3 million in funding, with notification to cities and counties coming from the League of Municipalities and County Commission Associations.

It is anticipated that all projects will be under contract by the end of the calendar year, the governor’s office added, after bids are taken in.