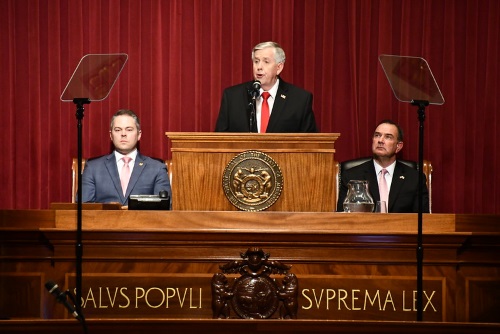 In his 2020 “State of the State” address on January 15 before the Missouri General Assembly, Governor Mike Parson (R) called for further investments in the state’s infrastructure, including $4 million in disaster recovery funds and another $50 million for its new transportation cost-share program.

[Above photo by the Missouri Governor’s Office.]

“We have made record progress over the past year, but there is still more to do and much more we can achieve with hard work,” he said. “That is why my call this legislative session is to propose initiatives aimed at building stronger communities, improving workforce development and education, revitalizing our aging infrastructure, and making government more accountable.”

As part of his speech, the governor highlighted several key transportation-related accomplishments for 2019, particularly a $81.2 million Infrastructure for Rebuilding America or INFRA grant from the U.S. Department of Transportation last July to build a new I-70 Missouri River Bridge at Rocheport.

He added that receipt of that INFRA grant triggered $301 million in state bonding, authorized by the General Assembly during legislative session, to repair or replace another 215 bridges across the state.

In addition to the bonding plan, the Missouri legislature included $50 million in general revenue in the state’s fiscal year 2020 state budget to repair or replace approximately 45 bridges throughout the state and another $50 million for a transportation cost-share program – a program his administration estimates will ultimately lead to nearly $150 million in new infrastructure and an economic impact of approximately $350 million.

“In all, the bold infrastructure proposals put forward this year have netted $1 billion in new projects for the state,” the governor said. “We’ve had some big wins worth celebrating and have shown what major progress we can make by working together for the people of Missouri. We are proud of all that we’ve accomplished in 2019 and look forward to another successful year in 2020.”