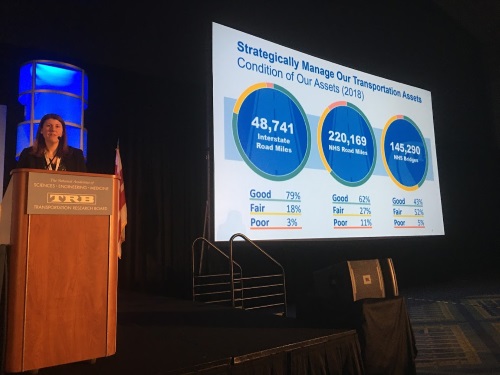 Strategies for keeping the nation’s transportation infrastructure in a state of optimal performance formed the focus of a January 15 state department of transportation roundtable at the Transportation Research Board annual meeting in Washington D.C.

“We are truly focused on maintaining the infrastructure we have and that’s mainly roads and bridges; they represent 90 percent of most state DOT assets,” explained Victoria Sheehan, commissioner of the New Hampshire Department of Transportation and the American Association of State Highway and Transportation 2019-2020 vice president.

And that’s not just for motor vehicles, she added. “Smooth pavements are just as critical for those using bikes, as well as those using our bus transit systems,” Sheehan explained.

“One of the challenges moving forward is that while state DOTs own large portions of those transportation assets, they are not the only owner,” she said. “Thus we need to partner with municipalities and others like the Federal Highway Administration. So asset management is all about our ongoing process improvement efforts in cooperation with our partners.”

However, Roger Millar – secretary of the Washington State Department of Transportation – noted that preserving existing transportation infrastructure is becoming more and more difficult due to reduced funding.

“The replacement value of all of our transportation assets is $181 billion; and so we should be spending $1.2 billion a year to maintain it,” he explained. “Yet we are only spending $690 million. We are at a place where it is time to change that. We need to educate policy makers on the impact of such under-investment. As things get deferred, we have to make tough decisions.”

Julie Lorenz, secretary of the Kansas Department of Transportation, said this is where the skill of “storytelling” comes into play for state agencies – quoting a Native American proverb that states, “Those who tell the stories rule the world.”

“We have to build and maintain a transportation system for the entire state – and money is not unlimited; we’re functioning under a salary cap,” she explained. “But it is important to realize roads and bridges are a means to an end. Transportation is really about so much more: non-emergency medical transit rides, letting people age in place, and home pharmaceutical delivery, for example. Transportation is about our future and our stories should reflect that.”

Part of that story must incorporate the challenges associated with growth, WSDOT’s Millar noted.

“We have the equivalent of the population of Seattle moving to our state every 10 years – and we are not building assets to accommodate that,” he pointed out. “While I have said – and often loudly – that we cannot build our way out of congestion, some capacity expansion is necessary in certain situations.”

Effectively tracking those needs with accurate data is another part of the challenge, noted Zenobia Fields, director of government and community relations for the New Jersey Department of Transportation. And that’s posing big technical challenges.

“For example, right now our culvert/drain systems and road networks do not ‘talk’ to one another,” she noted. “We also want to avoid going to 10 different subject management experts to answer one question.”

To that end, the agency is creating a real-time technology-based Transportation Asset Management Plan or TAMP that uploads data on infrastructure conditions via smart phones from the field.

“That information is important not just for maintaining those systems – it will help us pinpoint where emergency reactionary work is needed, too,” Fields said. “We need to be able to look at our entire asset inventory at one; everything we have on hand. And so we’re creating a centralized repository of information to do that.”

She added that the New Jersey DOT expects to have completely established that new data collection network by July of this year.

And it is that is kind of data which is critical to explaining the role state DOTs play in keeping the nation’s transportation system functioning effectively and efficiently, emphasized Carlos Braceras, executive director of the Utah Department of Transportation and immediate past president of the American Association of State Highway and Transportation Officials.

“We can’t just say better is better; we have to explain why is it better and what that means to legislators and the public, especially in terms of safety,” he said. “Also, we’re taking money from the public to do this: we need to show we’re not only being fiscally responsible with it but that we know where to spend it most effectively as well.”