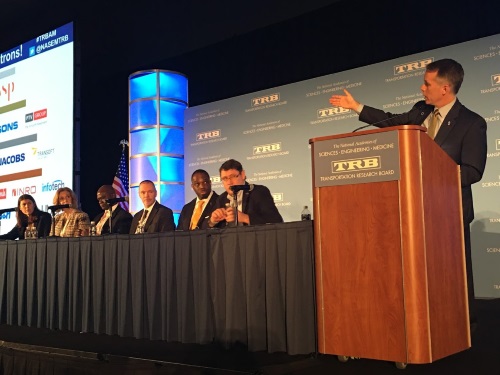 State department of transportation executives highlighted a number of different strategies and tactics aimed at reducing traffic fatalities for motorists, pedestrians, and bicyclists during a roundtable discussion held January 14 at the Transportation Research Board annual meeting in Washington D.C.

“Imagine, if you would, that every day for the remainder of this year a 737 airliner went down and 100 people died each time,” noted Patrick McKenna, executive director of the Missouri Department of Transportation and the American Association of State Highway and Transportation Officials 2019-2020 president, in his opening remarks.

“How shocked would you be? How would you change your behavior as an airline passenger? Would you stop using airlines? Now realize that we are losing 100 people on roadways every day,” he added. “This is a crisis in part of our transportation network, but we have become desensitized to this issue. It is simply unacceptable; we have to move beyond this and we have to take actions now, not 10 or 15 years from now.”

McKenna emphasized that traffic safety is more than a mission; it is a “moral imperative” and thus should be a permanent topic on the agenda of state DOTs and other transportation safety organizations “until we reach goal of zero” fatalities.

However, he noted one key issue is that 94 percent of crash fatalities are caused by “human behaviors” such as impairment, speeding, and distracted driving. So one key element of this renewed safety emphasis is how to convince people to change their behaviors.

“When you consider that 12 percent of all highway users are unbuckled yet they contribute to 62 percent of all [traffic] fatalities, you realize that issue does not require [transportation] engineering to solve,” McKenna said. “The simple act of buckling seatbelts each and every time could reduce [annual] fatalities by 20,000.”

“The cell phone is a huge problem,” Schneweis said. “In 2011, one out of every three Americans had cell phones; now that is 80 percent. Sometimes, with our standards and laws, we’re afraid to make a push. But in this area we need to push.”

Michigan DOT’s Ajegba agreed. “Cell phone usage and many other things come into play” where distracted driving is concerned, he said. “This is a very serious issue.”

Michael Tooley, director of the Montana Department of Transportation and chairman of AASHTO’s Committee on Safety, stressed that doubling down on what works in terms of reducing traffic fatalities needs to be done – even if “what works” is not popular.

“If you have been where I have been in my life, with the families and the victims [of traffic fatalities], you cannot avoid that,” Tooley said – referencing his experiences during his previous 28-year career with the Montana State Highway Patrol. “The three major categories of [traffic] killers are impaired driving, roadway departure, and a lack of seatbelt use/restraints.”

Toks Omishakin, director of the California Department of Transportation, echoed that thought, noting that one “big challenge” when it comes to improving traffic safety is that the issue of traffic safety encompasses more than just motor vehicle drivers.

“Roughly 10 people die every day in California using the transportation network, but three of those 10 will be a non-motorized transport user,” he explained. “We’re also seeing that states with warmer climates have higher numbers of pedestrian fatalities.”

Victoria Sheehan, commissioner of the New Hampshire Department of Transportation and AASHTO’s 2019-2020 vice president, added that her agency is trying to implement similar infrastructure improvements as well – changing the “character of roadway” in some cases to make it “less comfortable” so motorists reduce their driving speeds.

“We need to be willing to keep striving to keep everyone safe who is using the roadway,” she said.