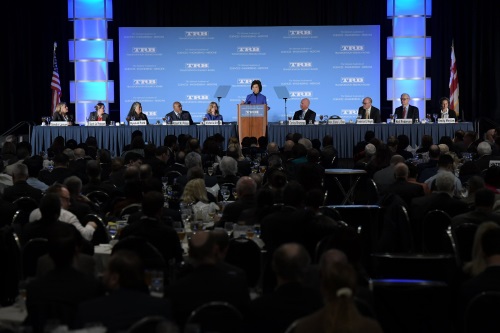 In a speech and presentation at the annual Transportation Research Board (TRB) meeting in Washington D.C., U.S. Department of Transportation Secretary Elaine Chao and Deputy Assistant Secretary Diana Furchtgott-Roth both emphasized the need to continue reserving the 5.9 gigahertz (GHz) wireless communication spectrum for transportation safety purposes.

[Above photo by TRB.]

“The potential appeal of AVs [autonomous vehicles] is their ability to save thousands of lives every year. AVs could also restore mobility for millions of people who face transportation challenges, such as the elderly and people with disabilities,” Sec. Chao explained during her keynote speech at TRB January 15.

“Next steps for this technology include … vehicle-to-everything (V2X) communication; systems will use the 5.9 GHz safety band of spectrum currently allocated for use in transportation systems,” she noted. “We believe it is very important to retain this bandwidth for this purpose and the department is actively advocating the FCC [Federal Communications Commission] to do so.”

Sec. Chao also stressed during her reamrks that the 5.9 GHz channel will play a key role in a new First Responder Safety Technology Pilot Program her agency is launching.

USDOT’s Furchtgott-Roth also made similar arguments in support of retaining the 5.9 GHz communication spectrum solely for transportation usage during a January 13 panel discussion at TRB.

“The notice of proposed rulemaking by the FCC would take 45 MHz of this [5.9 GHz] spectrum – over half – and give it to unlicensed WiFi. The remaining 30 MHz would be divided into 20 MHz for CV2X, a yet unproven technology, and 10 MHz for DSRC [dedicated short-range communications] a proven technology,” she pointed out.

“While such an action will help people eager to add ever more internet and other communications services, it could jeopardize [the] ability to leverage communications to vehicles to improve traffic safety and increase travel efficiency,” Furchtgott-Roth emphasized.

“We cannot be sure that those billions of new devices wanting to use those airwaves will not delay deployment of vehicle safety systems or interfere with traffic safety, contributing to car accidents,” she said.

[Editor’s note: Jim Tymon, executive director of the American Association of State Highway and Transportation Officials, touched on similar points in a video following the unanimous and controversial vote by the FCC last December to move forward with its 5.9 GHz rulemaking effort.]

She added that USDOT research shows that unlicensed WiFi can create out of band interference that would lower the reliability of CV2X and DSRC, making it unfit for transportation safety.