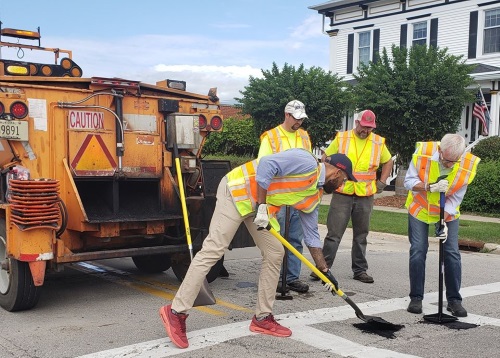 Just over 1,900 local governments received the first round of the additional local road funding provided by the state’s 2019-2021 budget on January; a total of more than $132 million from the General Transportation Aids, Connecting Highway Aids and Expressway Policing Aids managed by the Wisconsin Department of Transportation.

[Above photo via the Wisconsin Governor’s Office.]

“We’re taking the first steps in providing municipalities with the additional resources they need to prioritize and complete badly needed improvements to local roadways,” noted Governor Tony Evers (D) in a statement.

“The increase in these payments, combined with the pending $75 million in Multimodal Local Supplement grants, better positions locals,” he added. “With 90 percent of our highways under local jurisdiction, it’s imperative that we provide necessary support for these critical roads.”

“Funding the capital needs of the state’s transit systems is an ongoing challenge,” he explained in a statement. “These grants will allow transit operators to replace aging diesel buses with new, efficient buses. We get a double benefit; improving air quality while supporting the mission of Wisconsin’s public transit systems of getting people to jobs, shopping, entertainment and appointments.”