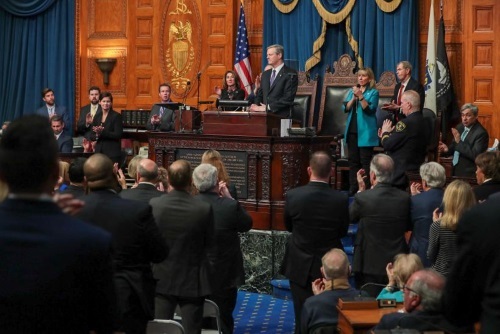 In his “State of the State” address before the Massachusetts legislature on January 21, Governor Charlie Baker (R), called on lawmakers to increase fiscal support for public transit and pass his request for an $18 billion transportation bond, filed in October last year.

[Above photo by the Massachusetts Governor’s Office]

“We know these are big, complicated issues, but we urge the Legislature to act as quickly as possible,” Gov. Baker explained in his remarks. “The sooner we have access to both the tools and the funding, the sooner we can make our transportation system safer, better, and more reliable.”

The governor said his 2021 budget proposal will include an increase of $135 million in operating funds for the Massachusetts Bay Transportation Authority, colloquially known as “the T.”

“This will ensure the T has the resources it needs to implement the recommendations of its safety review panel and continue to accelerate service improvements,” he noted

“Tonight, I’m committing the Commonwealth [of Massachusetts] to achieving an ambitious climate goal: net-zero greenhouse gas emissions by 2050,” he said.

That ambitious effort plays into the participation of Massachusetts within regional coalition of 12 Northeastern and Mid-Atlantic states, along with the District of Columbia; a coalition that issued a nine-page draft policy proposal in December that calls for establishing a cap on GHG emissions from transportation fuels while investing millions of dollars annually to develop cleaner transportation systems and more resilient transportation infrastructure.

“Greenhouse gas emissions from transportation have been on the rise for decades and now represent 40 percent of this state’s total emissions. Unless we take on transportation, we won’t meet our objectives,” Gov. Baker pointed out in his speech. “I get that this is going to be hard. But together, we have a real opportunity, and a responsibility to achieve a significant reduction in transportation emissions.”