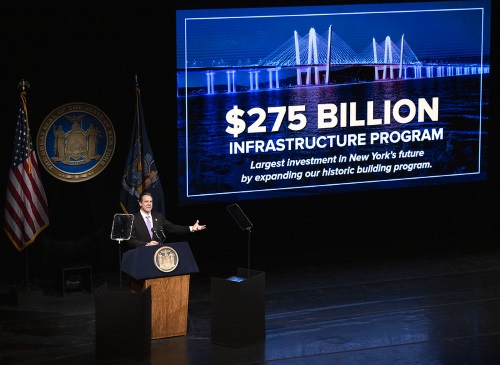 Governor Andrew Cuomo (D) proposed an ambitious $275 billion infrastructure investment program for New York during his “state of the state” speech on January 21, with $87 billion of that program focused on transportation needs, including mass transit, railroads, airports, highways, bridges, and tunnels.

[Above photo by Darren McGee/Office of Governor Cuomo]

“This is the nation’s largest building program; building bigger than anything we’ve done before,” the governor said in his remarks, highlighting specific investment areas within his fiscal year 2021 budget proposal.

“We have exciting new projects: a $12 billion, two-year capital plan, including $5.8 billion for upstate roads and bridges; a $52 billion capital plan for the MTA [New York City’s Metropolitan Transportation Authority]; $100 million to do a second round of upstate airports, where we will have effectively rebuilt all of upstate New York’s airports when we’re done. And $300 million to reimagine the Erie Canal,” he said.