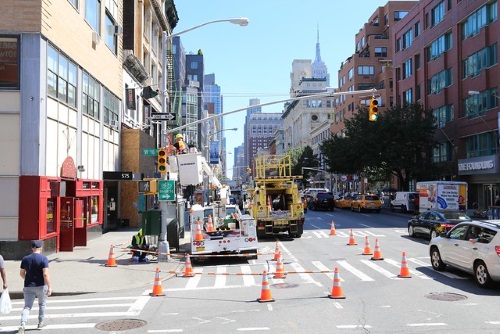 A survey conducted by the Boston University Initiative on Cities or BUIC indicates that roads are the top infrastructure priority for many of the 119 U.S. city mayors participating in the school’s annual poll.

[Above photo by the New York City DOT]

Roughly 45 percent of them said infrastructure is the “most significant issue” that they hope gets discussed in the 2020 presidential election – the most popular response by more than 30 percentage points, BUIC said.

Roads topped the list of infrastructure priorities, according to BUIC’s poll, with 66 percent of mayors saying they would “prioritize” work on them in they had new funds. Water, wastewater, and stormwater infrastructure followed at 51 percent, with mass transit placing third as a key infrastructure issue with 43 percent.

Yet when mayors were asked to pick just one “big ticket” infrastructure investment they would prioritize if given unrestricted funds, roads placed third behind water, wastewater, and stormwater facilities and mass transit needs.

The survey also found a significant proportion of mayors are concerned with the safety of bicyclists and pedestrians in their communities and are introducing infrastructure changes to improve safety for them.

BUIC added that two-thirds of the mayors it polled have added more bicycle-dedicated lanes to their streets, while at the same time upgrading sidewalks and traffic signal technologies to better accommodate the needs of pedestrians.

State departments of transportation are also playing a bigger role in helping cities and other municipalities improve their road networks.

This follows the release of $115 million in state-matching funds last March to 189 Indiana cities, towns, and counties via the same program.

“Efficiently and safely moving people and commerce is vital to the quality of life and vitality of our communities,” noted Indiana DOT Commissioner Joe McGuinness in a statement at the time. “[We are] excited to partner with communities through this matching grant program to make infrastructure investments that contribute to the success of all Hoosier cities, towns, and counties.”