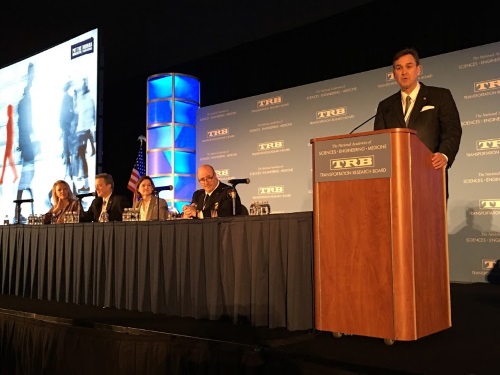 Engaging more public and private sector transportation industry stakeholders in a more collaborative, focused effort will be key to successfully combating human trafficking activity in the United States, according to a panel discussion held during the annual Transportation Research Board meeting in Washington D.C.

“Nearly 25 million across the globe are victims of this form of modern slavery and while data is scarce, survivor studies continue to underscore intersection of human trafficking and transportation,” Joel Szabat, acting under secretary for policy at the U.S. Department of Transportation, noted during the January 13 discussion.

“This is a crime estimated to generate worldwide over $150 billion in profits – and it is a crime that continues because it is a low risk, high profit business that is difficult to recognize,” he said. “USDOT wants to change that because safety is our number one priority. But the key to our success will be working more closely with both public and private sector transportation industry stakeholders.”

“Training is huge; if we do not train front line employees about how to respond to potential trafficking situation, we are missing an army of eyes and ears on the ground that can make a big difference,” Joyner said – points she also made during a webinar sponsored by the National Rural Transit Assistance Program last May.

To date, Joyner said her organization, based in Dallas-Fort Worth, has trained 1,000 transit leaders and front-line employees in human trafficking awareness. “How has this made an impact? One Dallas Area Rapid Transit bus operator came in contact with a distressed 15-year-old girl, was able to recognize the situation, and was able to get her to safety,” she noted.

Neil Trugman, chief of police for Amtrak, emphasized the importance of training in his remarks.

“The common theme in this is training and awareness,” he said. “Since 2012, our front line employees have reported suspected trafficking incidences and now have two federal cases from that effort. That would not have happened before 2012 without training.”

Trugman also noted that changing how his law enforcement department collects data has been important as well. “We now have a crime category that was not classified as human trafficking before,” he explained.

Kendis Paris, executive director and co-founder of the U.S.-based nonprofit Truckers Against Trafficking, added that traffickers are using every mode of transportation to move and exploit victims – and that sometimes transportation itself can be a barrier for victims seeking to escape.

“It is key to build a local response and to include transportation ‘brick and mortar’ like truck stops and highway rest stops in public education campaigns,” she said. “They can serve as locations that not only help raise awareness about trafficking but get information about help to victims, too.”

Paris added that her organization has helped create an introductory webinar specifically for state DOTs and other transportation agencies to broaden awareness of trafficking among transportation stakeholders. “There are ‘plug and play’ things that can be done in terms of training; you do not need to create your own,” she said.