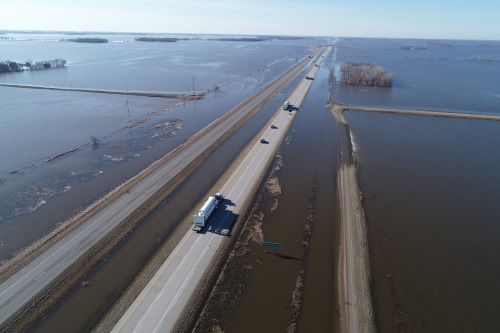 The Federal Highway Administration issued $4.3 million in “quick release” Emergency Relief or ER funds to the North Dakota Department of Transportation on January 27 to help repair roads and bridges damaged by a series of floods last year.

Heavy rains in the late summer and fall of 2019, as well as a historic blizzard last October, resulted in flooding, landslides and the erosion of highways across North Dakota, the FHWA noted in a statement.

Those “quick-release” funds will help reimburse the North Dakota DOT for costs associated with emergency repairs needed to prevent further damage, the FHWA pointed out, adding that they are considered a “down payment” on the costs of short-term repairs while state officials continue damage assessments for long-term repairs.

Heavy flooding afflicted several states last year, with North Dakota Gov. Doug Burgum (R) noting that preliminary assessments at the time indicated that flood damage was expected to top $10 million; a cost exacerbated by the financial burden faced by local and tribal jurisdictions whose snow removal and emergency fund budgets were depleted by record or near-record snowfall in February and March last year, with season totals of 90 to 100 inches of snow in many areas – double the normal amount.