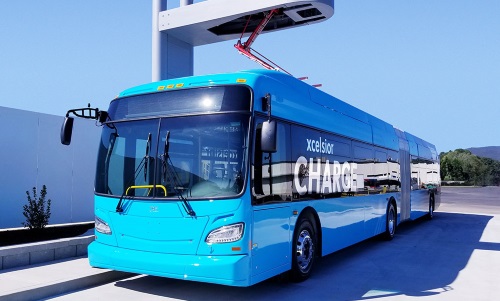 The Federal Transit Administration issued a notice of funding opportunity on January 24 offering up to $130 million in competitive grant funds through its Low or No Emission (Low-No) Bus Program to spur the purchase or lease of transit buses that produce little to no harmful exhaust pollutants.

[Above photo by New Flyer.]

Eligible projects include the purchase or lease of buses powered by technologies such as hydrogen fuel cells, battery-electric engines, and related infrastructure investments such as charging stations.

FTA said in a statement that applicants eligible to receive grant money include public transit agencies, state transportation departments, and Native American tribes – adding that the NOFO also includes new criteria regarding rural challenges and innovation, in accordance with the U.S. Department of Transportation’s R.O.U.T.E.S. initiative, launched last year, as well as FTA’s new Accelerating Innovative Mobility effort kicked off at the annual Transportation Research Board meeting in Washington D.C. in mid-January.

The agency pointed out that it issued $84.95 million in grants to 38 projects via its Low-No Emission Bus program in fiscal year 2019.

In related news, the FTA issued an $87.4 million grant to the Tri-County Metropolitan Transportation District of Oregon on January 23 via its Capital Investment Grants or CIG program to help fund a $175 million 15-mile-long bus rapid transit or BRT project.