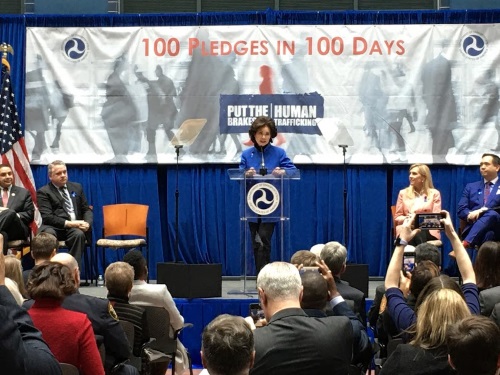 It’s common knowledge that transportation plays a key role in the movement of people and goods. But few think about the role transportation can play in rescuing people who are being moved against their will by traffickers.

“America’s roadways, railways, airways, and waterways are being used to facilitate this modern form of slavery,” explained U.S. Department of Transportation Secretary Elaine Chao (seen above) in a speech at the “Put the Brakes on Human Trafficking” event hosted by USDOT at its Washington, D.C., headquarters on January 28.

“But the transportation sector is in a unique position to help save victims of human trafficking from unimaginable suffering, abuse, and despair [while] assisting law enforcement in apprehending the perpetrators,” she said. “Our purpose today is to make a difference; to make our transportation networks a more effective force in thwarting human trafficking.”

Transportation’s role in combating human trafficking has not escaped the attention of state department of transportation leadership. Education, collaboration, and public outreach are some of the key tactics three state  DOT executives said they are using as building blocks to help thwart human trafficking activity.

Sec. Chao also announced at the event that USDOT will provide $5.4 million in new grants via the Federal Transit Administration’s Human Trafficking Awareness and Public Safety Initiative to 24 organizations across the country to fund projects aimed at helping prevent human trafficking and other crimes on public transportation.

But she emphasized that there is still a long way to go. “It is shocking to learn that in this day and age, something so horrible as human trafficking exists. But it is happening and it is happening in our cities, suburbs, and rural areas,” Sec. Chao said. “So let’s bring together our best efforts, the best strategies, and necessary resources for our battle against human trafficking.”

That was the impetus behind the state DOT participation on the “Combating Human Trafficking in Our Communities: State and Local Approaches” panel at the USDOT event.

“This is an ugly issue; an issue no one wants to talk about,” explained Marty Kemp, the first lady of Georgia. She said “education and awareness” are critical because “learning what to look for and what to do with the information” is how human trafficking is stopped.

“This is what has got us engaged on the issue,” noted Georgia DOT’s Russell McMurry. “We have an opportunity as a transportation agency through administering grants to really make awareness of human trafficking and how to fight it ‘front and center’ issues within our industry.”

“We’re developing more detailed training not only for our employees but for our contractors as well,” he said. “We’re hoping to spread awareness about this terrible crime wider within our section of the transportation industry.”

Louisiana DOTD’s Wilson stressed that since there is a “tremendous” amount of trafficking activity that occurs via the nation’s highways, it gives state DOTs a prominent opportunity to interdict it.

“We have to recognize we’re in a position of authority that can make things happen,” he said. “Our employees are work the interstates on a regular basis. We have the opportunity to extend anti-human trafficking education and training through our grant programs. And we can collaborate with other state agencies, such as the state police, and NGOs [non-government agencies], to reach out to local communities as part of our transportation work. We’re hoping to save hundreds of folks from this terrible crime though such efforts.”