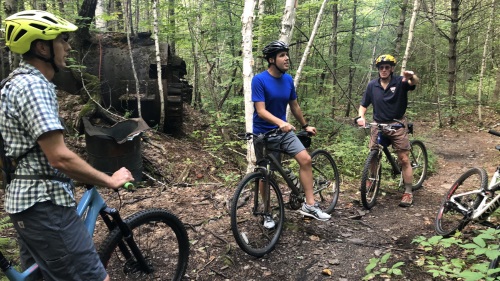 [Above photo via Rep Pappas’ Office.]

“This legislation will expand our active transportation networks, providing additional ways to knit communities together, support recreation, and respect our environment,” Rep. Pappas said in a statement. “It also makes good economic sense as these strategic investments in infrastructure throughout the state will bolster local economies and enhance the quality of life for residents and visitors alike.

He said the hope is to include this bill within the surface transportation funding reauthorization legislation currently being worked on by the House of Representatives.

“If included in this package, the legislation will help provide the necessary resources and policy changes to deliver a 21st century transportation system to the nation,” Rep. Pappas noted. “This transformative approach to funding active transportation would meet growing demands from rural, suburban and urban communities across America for convenient, accessible, well-maintained biking and walking routes.”

Advocacy groups, such as the Rails-to-Trails Conservancy (RTC), believe such “targeted” federal investment is the “affordable and quick way” to make America’s active transportation system more convenient for everyday travel.

“Strategic infrastructure investments that weave together existing active-transportation facilities form connected transportation systems … making it easier and safer for people to walk and bike where they want to go,” explained Kevin Mills, RTC’s vice president of policy, in a statement. “This will work in the same way as our road and rail networks, connecting people within and between communities.”

The group added in a report issued last year that shifting short trips from driving to walking and biking via connected active-transportation infrastructure could help generate a return on investment of $73 billion to $138 billion per year in the United States – if that infrastructure connects to public transit systems.

For example, the Ohio Department of Transportation released a Walk.Bike.Ohio plan last July; a plan designed to guide Ohio’s bike and pedestrian transportation policies and investments in infrastructure, as well as examining how “new mobility” and its associated technologies will impact how Ohioans walk and bike in the future.

“Our state DOT members are no longer focused on just highways and roads; they’re emphasizing a multimodal focus,” Jim Tymon, executive director of the American Association of State Highway and Transportation Officials, explained during a presentation at the National Bike Summit 2019 last March.

“They are more focused on overall mobility needs; how can we get all modes of transportation to operate in a safe way to move people and goods most effectively and efficiently to their final destinations,” he said.