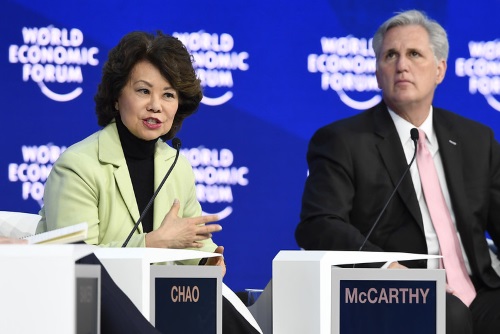 At the annual World Economic Forum meeting in Davos, Switzerland, U.S. Department of Transportation Secretary Elaine Chao (above at left) provided a broad outline of her agency’s regulatory approach in relation to the nascent urban air mobility or UAM market.

[Above photo by the WEF.]

“These vehicles have the potential to create new mobility options for millions and change how people travel to and around cities, as well as to and from rural areas,” she explained in a speech. “We will be working with state and local governments and stakeholders over the next two years to define the requirements for these unique types of operations.”

Sec. Chao emphasized that UAM vehicles will “not be helicopters or scaled-up drones. They are complex systems involving infrastructure, new systems, and new aircraft.” As a result, she said “a segregated approach to airspace integration may work for initial, low-volume operations resembling existing helicopter corridors in large urban areas. But a long-term solution that accommodates hundreds – if not thousands – of these air vehicles operating simultaneously over urban landscapes is a complex challenge. It will involve advanced concepts in Air Traffic Management Systems and Trajectory Based Operations, to name a few.”

From a regulatory perspective, Sec. Chao said USDOT will deploy a “performance-based” rules approach to ensure that, as UAM technology and operations evolve, federal requirements will strengthen safety but be agile enough to grow with the technology.

“Let me add one more thought to this discussion,” the secretary noted. “To be fully deployed, UAM technology must first win the public’s trust and acceptance. UAM systems will be flying directly over – and landing near – neighborhoods and workplaces. So it is imperative that the public’s legitimate concerns about safety, security, noise, and privacy be addressed.”

A study issued by the National Aeronautics and Space Administration in late 2018 noted that airport shuttle and air taxi services are considered the most “viable markets” for UAM operations in the near term.

However, infrastructure availability and capacity combined with high cost is a major barrier to fully capture available UAM demand, NASA said in its report, with weather posing a “significant challenge” with low visibility, strong winds, and storms being the most frequent adverse conditions.

For example, the Utah Department of Transportation’s division of aeronautics is leading an effort to create a state-supported UAM infrastructure system, which includes the testing of aerial taxis and personal aerial vehicles in current and future flight corridors, including visual flight rules or VFR corridors as well as urban and rural airspace.

“Urban Air Mobility is an exciting evolution in the development of Keeping Utah Moving,” said Jared Esselman, Utah’s director of aeronautics, in a statement last October. “Utah DOT is a leader in transportation innovations and this [UAM] is no exception.”