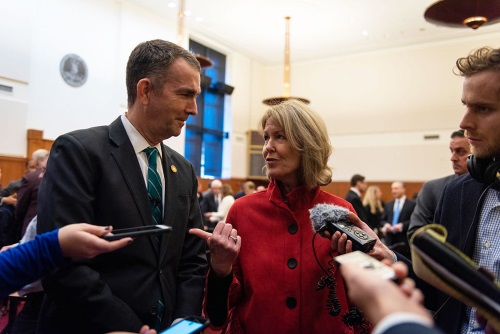 A broad transportation package unveiled by Virginia legislative leaders on January 27 and supported by Governor Ralph Northam (D) (seen above at left) includes a proposal to raise the state’s motor fuels tax by a total of 12 cents per gallon over the next three years, in annual three-cent-per-gallon increments.

A two-page synopsis of this comprehensive legislative package – outlined in House Bill 1414 and Senate Bill 890 – explained that revenues from motor vehicle taxes continue to fall, with consulting firm KPMG estimating a 33 percent reduction in Virginia gas tax collections by 2030; resulting in fuel tax revenues dropping below $500 million in 2030.

This legislation modernizes Virginia’s transportation funding model by cutting vehicle registration fees in half, raising the gas tax, and indexing it to inflation. New revenues will build a sustainable transportation system over the next decade and will be distributed through a new streamlined funding mechanism that supports a multimodal network.

“We know we can’t pave our way out of congestion,” said Virginia Senate Majority Leader Dick Saslaw in a statement. “This bill will ensure we are using taxpayer money efficiently, will save Virginians’ time, and will enhance infrastructure options for moving people and goods throughout the Commonwealth. This measure is long overdue and a much needed path forward to addressing Virginia’s transportation challenges.”

The legislative proposal also establishes a Virginia Passenger Rail Authority to promote and expand passenger and commuter rail service across the Commonwealth. In coordination with the Northern Virginia Transportation Commission, the legislation authorizes the use of bonds to assist with the construction of a new rail Long Bridge across the Potomac River – part of a $3.7 billion deal cemented by the state last December with freight railroad CSX.

The package also forms a Transit Incentive Program, which will promote improved transit service, support regional routes, and reduce barriers to transit use by low-income individuals, and create a Virginia Highway Safety Improvement Program via which several safety policies would be issued, including: prohibiting the use of handheld cell phones while driving; banning open containers of alcohol in vehicles; making failure to wear a seatbelt a primary offense; enhancing speed enforcement; and allowing localities to lower speed limits.

“This legislation is the foundation for a true multimodal transportation system,” noted Shannon Valentine, Virginia’s secretary of transportation. “By building a sustainable funding bridge to the future, Virginia is making a bold investment in safe, reliable travel options that create mobility for all Virginians.”