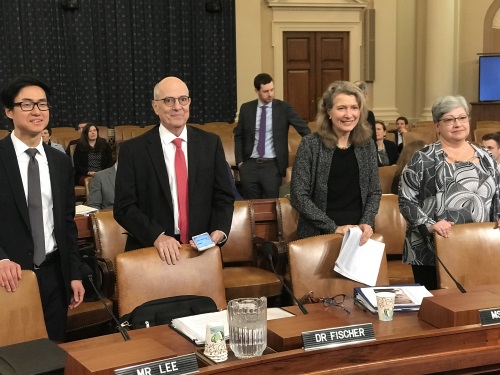 Analyzing the effectiveness of current funding transportation infrastructure investment practices while investigating new methods served as the focal point for a House of Representatives Committee on Ways and Means hearing on January 29.

“We all recognize the need to fix our roads, bridges, transit, water systems, and electrical grids,” noted Rep. Richard Neal, D-Mass., chairman of the Ways & Means committee, in his opening remarks.

“With that in mind, we will use this hearing to explore how to best direct our federal infrastructure investments to ensure that we invest wisely,” Rep. Neal said. “We will also discuss ways to build on the federal-state partnership that is the cornerstone of America’s infrastructure financing system.”

“Of course, user fees should remain a key source of financing, but that shouldn’t stop us from thinking creatively on how to meet those undeniable 21st century challenges,” Rep. Brady said in his remarks.

Diane Gutierrez-Scaccetti, commissioner of the New Jersey Department of Transportation, stressed in her testimony before the committee that there is “no more important funding decision” than that which involves the nation’s transportation network.

“Not unlike utilities, the transportation network is used every day by everyone, and perhaps the single service each of us takes for granted,” she said. “Whether it be by car, train, truck, walking, or biking, everything depends on safe and reliable transportation.”

However, Gutierrez-Scaccetti stressed that “when the transportation system fails, our economy is in jeopardy … families are disconnected and, most importantly, our national defense is compromised.”

And “unpredictable funding” – especially where the federal motor fuels tax is concerned – is generating such failures, she warned.

“Since its inception in 1956, the Highway Trust Fund [HTF] remains the bedrock foundation of a strong federal surface program on which every state and their local partners rely,” Gutierrez-Scaccetti explained.

“The current cycle of short-term program extensions and continuing resolutions combined with a recurring cash shortfall in the HTF is unpredictable and grossly inefficient,” she added. “Money is programmed for preliminary design, only to find out that funds will not be available to go to final design or construction – with shelving the project is the only option.”

Joung Lee, director of policy and government relations for the American Association of State Highway and Transportation Officials, noted for example that in 2020 the HTF is expected to bring in $13 billion less than what it spends, with that gap growing to $26 billion by 2030.

“This is not a new situation and Congress has shifted $140 billion from the General Fund over the last 12 years to avoid a massive disruption to highway and transit programs,” he said in his testimony.

The “primary culprit” Lee noted is that the federal motor fuels tax has not been adjusted since 1993. “As a flat excise tax levied by the gallon rather than based on retail value like a sales tax, the nominal value of the [fuel] tax has increased by precisely zero percent in the last 27 years,” he emphasized. “This compares to college tuition which almost quadrupled between 1993 and 2015 or doubling of health care costs. Even the price of an average new car went up by 51 percent.”

That’s why New Jersey DOT’s Gutierrez-Scaccetti stressed during the question and answer portion of the hearing that increasing and stabilizing federal funding for transportation investments is critical.

“The single most impactful inefficiency we deal with is the inability for proper planning [because] of not knowing what the next round of [surface transportation] reauthorization might do or what it may provide in terms of funding,” she pointed out.

Gutierrez-Scaccetti added that alternative financing methods, such as public-private partnerships or P3s, are not always a suitable replacement for HTF monies.

“If there is not a project-based revenue stream in the form of tolls we see typically on highway P3s, availability payments would have to be made to the private concessionaire out of the State Transportation Trust Fund,” she noted.

“But that will then limit our ability to carry out the overall state transportation investment program,” she added. “In essence, we would be sacrificing many necessary projects to support one – the consequence of which is to continue the deterioration of the rest of the system.”

Gutierrez-Scaccetti also emphasized that though New Jersey and other states “do our best to generate revenue for transportation,” even the sum of state-generated transportation funding “will never be sizeable enough” to address the current infrastructure investment backlog.

“We must have access to federal resources in order to keep New Jersey’s portion of our national infrastructure in a state of good repair,” Diane Gutierrez-Scaccetti said.

“Even just a few pennies a year [in increased federal motor fuel taxes] will have a significant impact on funding growth and help us break the cycle of uncertainty and underfunding that have inhibited efficient transportation planning and execution,” she added.