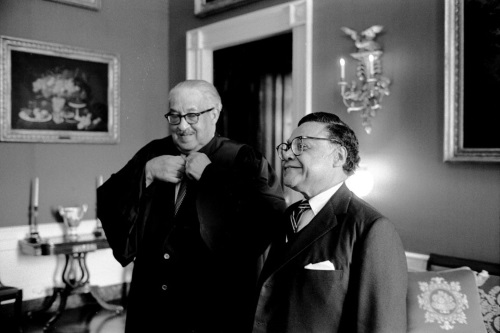 Sen. Bob Casey, D-Penn., proposed legislation this week with bipartisan support that would rename the U.S. Department of Transportation’s headquarters building in Washington, D.C., after William Thaddeus Coleman, Jr. (in photo above at right) – the fourth U.S. Secretary of Transportation and first African American to serve in the position.

Dubbed the William T. Coleman Jr. Department of Transportation Headquarters Act, that legislation seeks to not only honor Coleman’s role in the transportation industry but his legal career as well, as he argued 19 cases before the U.S. Supreme Court and co-authored the historic Brown v. Board of Education legal brief as well.

“Secretary Coleman exemplified the virtues of public service,” Sen. Casey said in a statement. “He was the first African American to serve as a U.S. Supreme Court clerk and helped argue McLaughlin v. Florida in 1964 to strike down laws preventing interracial marriage.”

Coleman – who died in 2017 – was appointed USDOT Secretary of Transportation by President Gerald Ford in 1975 and received the Presidential Medal of Freedom from President Bill Clinton in 1995.