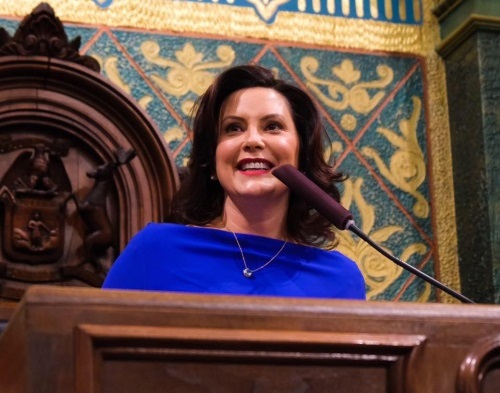 In her second state of the state address on January 28, Governor Gretchen Whitmer (D) (seen above) proposed that the State Transportation Commission issue $3.5 billion worth of bonds to fund a “Rebuild Michigan” program would nearly double the amount of funds available to fix roads over the next five years and help speed up project construction.

[Above photo by the Michigan Governor’s Office.]

She added that moving projects ahead four to six years would also allow the Michigan Department of Transportation to save money by avoiding the annual cost of inflation.

“Our roads are dangerous, and the longer we wait, the more expensive it will be to fix them,” the governor explained. “My ‘Rebuild Michigan’ plan will ensure we start moving dirt this spring and save us money in the long run. Since it doesn’t require the legislature to act, we can get started right away. That’s important. Cutting down on the time we take to repair Michigan’s most frequently traveled trunklines and state roads is fiscally responsible.”

The roads that would be fixed under the governor’s bonding plan would be high volume freeway and non-freeway roads with the greatest economic impact and more average passenger vehicles per day.

“But let me be clear: these new projects will only address the worst of our most highly traveled state roads,” Gov. Whitmer emphasized. “We still need the legislature to come up with a real, long-term solution to fix the roads.”

The commission subsequently voted 6-0 on January 29 to authorize the Michigan Department of Transportation to sell such bonds for 49 projects, which include completely rebuilding essential state-owned freeways and bridges, while also clearing the way to accelerate another 73 projects across the state.

“Bonding makes sense when the degradation curve shows the cost of putting off rebuilding outweighs the cost of financing and interest,” said Commissioner George Heartwell in a statement.

He added that because the bonds finance rebuilding as opposed to more temporary fixes, the roads and bridges will far outlast the payoff dates for the bonds.

“Our hardworking employees are ready to get to work rebuilding Michigan’s infrastructure this spring,” noted Paul Ajegba, director of the Michigan DOT. “Governor Whitmer’s bonding plan will save us crucial time and save taxpayers money. I’m excited for the department to get started.”