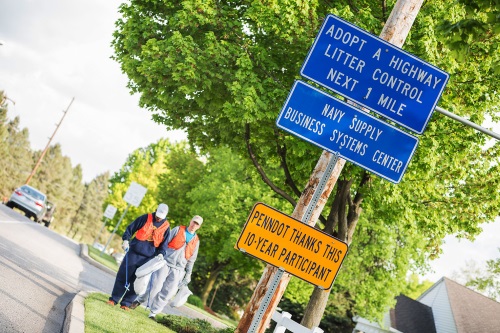 In the first comprehensive statewide research study on highway litter, the Pennsylvania Department of Transportation indicates that more than 502 million pieces of litter on Pennsylvania’s roads, with the most common being cigarette butts (37 percent) and plastics (30 percent), while plastic film and beverage containers are the most prevalent items – with an estimated 29.3 million beverage containers alone littering the state’s roads.

[Above photo by Dorie Heyer/U.S. Navy.]

It included on-the-ground litter counts in 180 locations statewide, a random phone survey of 500 residents, and sponsored a forum where 120 community, business, and government leaders shared their views on litter impacts and what should be done to end littering.

Meanwhile, PennDOT spends upwards of $13 million per year on staff and resources to pick up litter along state-owned roadways.

“Cleanup is not a sustainable strategy,” said Yassmin Gramian, PennDOT’s acting secretary, in a statement. “And the enormous amount of resources committed to it mean less funding for other transportation uses, such as improving roads.”

PennDOT, DEP, and Keep Pennsylvania Beautiful said they plan to form a workgroup of state government agencies, local governments, and industry and community leaders to use the research results to develop and carry out a plan of actions to reduce littering in Pennsylvania.

The goal of that collaboration is to build the plan around four behavior change strategies, including: providing more waste collection infrastructure, such as waste and recycling facilities and trash cans; public and school-based education; laws and ordinances; and incentives and enforcement.