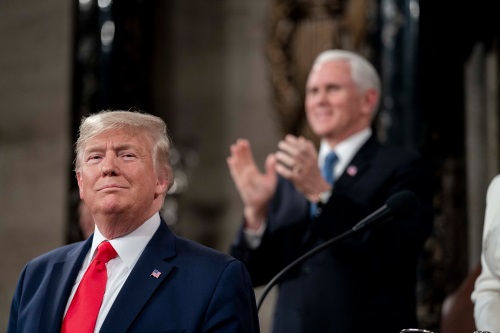 Brief yet pointed words of support for infrastructure investment from President Trump during his third State of the Union speech on February 3 touched off a range of discussions within Congress regarding the need to pass surface transportation reauthorization legislation.

“We must rebuild America’s infrastructure [and] I ask you to pass Senator John Barrasso’s highway bill to invest in new roads, bridges, and tunnels all across our land,” the president said in his remarks – echoing a similar exhortation he made during his State of the Union speech in 2019.

“Both parties should be able to unite for a great rebuilding of America’s crumbling infrastructure,” President Trump said last year.

“I know that Congress is eager to pass an infrastructure bill, and I am eager to work with you on legislation to deliver new and important infrastructure investment, including investments in the cutting-edge industries of the future,” he stressed. “This is not an option. This is a necessity.”

Those remarks prompted Sen. Barrasso, R-Wyo., to note during a U.S. Fish and Wildlife oversight hearing on February 5 that the America’s Transportation Infrastructure Act of 2019 referenced by the president – passed unanimously by the Committee on Environment and Public Works last year – authorizes $287 billion worth of surface transportation investment over the next five years, including $259 billion for formula programs to maintain and repair America’s roads and bridges.

“The Senate is ready to answer the president’s call,” Sen. Barrasso said in his remarks. “[This legislation] will help fix our roads, help speed up project delivery, help protect the environment, and help grow America’s economy.”

[Editor’s note: In the video below, American Association of State Highway and Transportation Officials Executive Director Jim Tymon explains why surface transportation funding issues will be a focus of great significance during AASHTO’s annual Washington Briefing in Washington, D.C.]

Yet Sen. Tom Carper, D-Del. – the ranking member on the EPW committee – stressed at the same hearing that finding the funds to support that level of investment remains a major challenge.

“I am putting my wallet out here for a reason,” he said. “When the president talked about transportation infrastructure, he did not mention how to pay for this stuff – and I believe, as many here do, that if things are worth having, they are worth paying for.”

Sen. Carper emphasized that while many in Congress want to improve infrastructure, it must figure out where the money will come from to pay for it.

“I think passing a transportation bill without any funding would be just awful,” he explained. “And we need to include folks [operating] electric vehicles and [ones running on] hydrogen to pay for it. But that is not our jurisdiction, so we need to lean on the finance committee to get there.”

Sen. Barrasso endorsed Sen. Carper’s suggestion to include alternatively-fueled vehicles within a funding mechanism aimed at bolstering transportation system investment – an issue he sought to address via legislation proposed in 2018 and 2019.

“I believe we should agree that everyone who uses the roads should help pay to maintain them,” Sen. Barrasso said at the hearing. “There isn’t a single answer, but among other solutions, I believe that the electric vehicle, which currently pays no federal gas tax, actually needs to make a contribution and pay into the system as well.”