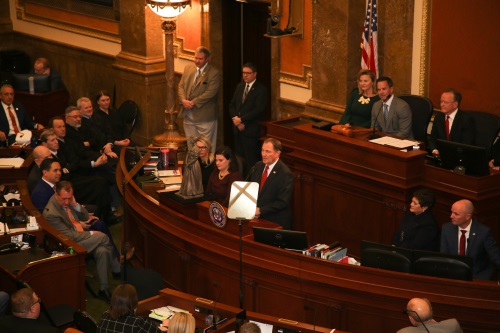 In his final state of the state speech on January 30, Governor Gary Herbert (R) (seen above at podium) said he is earmarking a $34 million “down payment” toward improvements in heavy rail, light rail, and bus transit within his proposed fiscal year 2021 budget for the state of Utah, along with $66 million to fund the installation of fast electric vehicle charging stations, to help accommodate the growing use of electric automobiles on Utah’s roads.

[Above photo by the Utah Governor’s Office.]

“Utah is thriving — and we are in the best position economically that we have ever been in our state’s history,” the governor said in his speech. “Significant challenges, though, do lie ahead for us. For example, projections show our population will reach 5.8 million by the year 2065. Growth is coming to the state of Utah. And we must plan for that growth, and proactively prepare the way for those who are coming.”

Gov. Herbert explained that “more people will drive more cars and create more traffic. So, what changes will need to be made to avoid a California-like gridlock in traffic, and time-consuming commutes? We need to boldly reimagine our roads to safely accommodate cars, mass transit, bikes, pedestrians, and even those scooters.”

In short, he said that Utah needs to “make commuting by transit as easy as commuting by car.” And that’s why his proposed $100 million investment in the state’s transportation and mass transit “is a necessary step.”