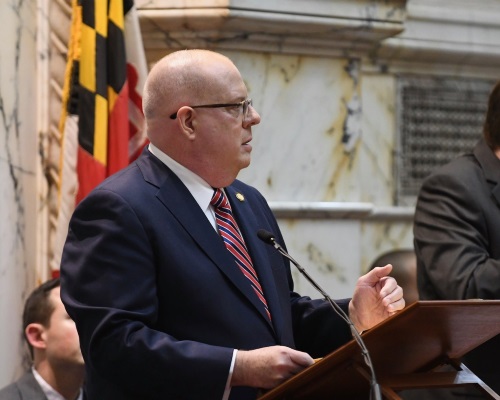 In his state-of-the-state address on February 5, Governor Larry Hogan (R) called upon Maryland’s legislature to fund his plan to advance the Howard Street Tunnel project, aimed at “improving Baltimore City’s infrastructure, increase business at the Port of Baltimore, and bring thousands of jobs to the region.”

[Above photo by the Maryland Governor’s Office.]

That project seeks to reconstruct a 124-year-old rail tunnel outside Baltimore; a move that would will break a rail bottleneck that impacts the entire East Coast and that will allow double-stack trains to reach the Port of Baltimore.

“There’s no better example of Maryland being open for business than the Port of Baltimore,” Gov. Hogan noted in a separate statement on February 11. “The port has never been more productive, and this record-breaking year shows its tremendous value as a regional economic engine creating good-paying, family-supporting jobs for tens of thousands of Marylanders.”

The governor in his February 5 speech also highlighted key transportation initiatives launched by his administration in 2019, especially the bi-state, bipartisan accord made with Virginia last November that seeks to create a new unified Capital Beltway (Interstate 495) highway system to replace the aging American Legion Bridge in part via public-private partnerships or P3s.

“We advanced a transformative regional interstate traffic relief plan, which will finally begin to address the second-worst traffic congestion in America and solve what has been the number one problem in the region for decades,” Gov. Hogan said in his remarks.