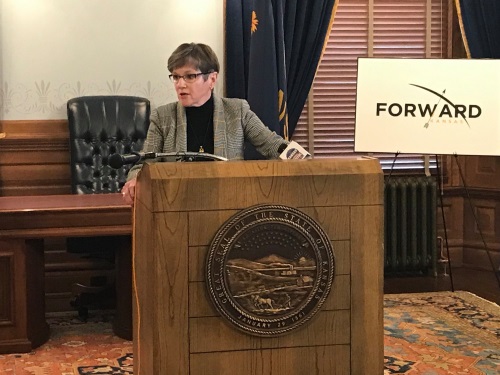 Governor Laura Kelly (D) (seen above) and Julie Lorenz, secretary of the Kansas Department of Transportation, unveiled a new transportation program called FORWARD on February 12; a program designed, in part, to be “flexible, responsive, and rolling” so major transportation projects are selected every two years instead of once a decade.

[Above photo by Kansas Governor’s Office.]

“FORWARD also calls for completion of delayed T-WORKS projects – transit, aviation, rail, bike and pedestrian solutions that solve problems in rural and urban Kansas – and more partnerships with local communities to increase both local matches and the number of improvements we can make,” the governor said in a statement.

In fact, the agency just began soliciting applications for the second round of its Cost Share Program on February 3; a program designed to provide financial assistance to transportation projects by leveraging state funding with local and private funding.

“FORWARD will provide better service through helping communities solve more transportation problems by utilizing all of Kansas DOT’s resources,” Lorenz said, noting that the plan includes halting transfers of monies out of the State Highway Fund to support non-transportation projects.

The governor added that since 2011 more than $2 billion has been transferred out of the State Highway Fund, causing the condition of the state’s highway system to decline. She started reversing that trend in early 2019 with a re-infusion of $160 million worth of highway funding for fiscal 2020.

“Infrastructure is about far more than just roads and bridges,” Gov. Kelly noted in her state-of-the-state address on January 15.

“It’s the means by which our school buses safely transport our most precious cargo. It’s how we make Kansans’ daily commutes faster and safer so they can spend more time with their families. And as an export state, it is how we get Kansas goods to market and keep our economy humming,” she said.

“Each [transportation] plan has improved upon the plan before, adapting to changing needs throughout the state and building on lessons learned,” the governor added. “Each plan has propelled Kansas into the future, making our transportation system one of the best in the nation.”