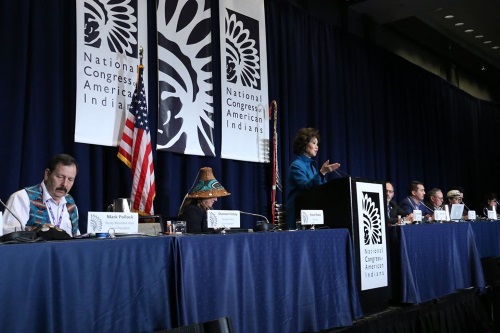 The U.S. Department of Transportation issued more than $8.9 million worth of grants to 80 federally recognized American Indian Tribal Nations on February 11 to support 91 transportation projects; most of them focused on improving traffic safety and quality of life for tribal communities, noted USDOT Secretary Elaine Chao in a statement.

That grant money is coming from the Federal Highway Administration’s Tribal Transportation Program Safety Fund and will support a wide range of endeavors, added FHWA Administrator Nicole Nason – from safety planning to sidewalks and road repairs, she said.

This follows up on a rulemaking effort launched by USDOT in October 2019 to streamline federal transportation funding distribution to American Indian tribes – creating a “less onerous” regulatory framework while promoting greater self-sufficiency among tribal governments.

Yet fiscal support from the federal government for tribal transportation needs is critical, explained Mary Beth Clark, president of the Intertribal Transportation Association (ITA), during a February 6 hearing held by the House of Representatives Committee on Transportation and Infrastructure.

“The conditions for successful economic development on Indian lands are founded on community stability that begins with infrastructure,” she explained in her testimony.

“There must be adequate law enforcement and judicial systems and basic human services, including roads, safe drinking water, wastewater, power and communication utilities,” Clark said. “When these systems are in place, Congress understood that tribes are in the best position to implement economic development opportunities, empower their tribal citizens, and build the economies of their reservations. Without such basic infrastructure, community stability becomes uncertain as young professionals and families seek better opportunities elsewhere.”

Yet she emphasized that state and local governments, in particular, are stepping up efforts to “break down the decades of transportation barriers” that have held tribal nations back from taking the “fullest advantage of our peoples, resources, and opportunities to improve our communities.”

For example, the Arizona Department of Transportation hosted a series of forums last year in partnership with the Inter Tribal Council of Arizona to connect agency personnel with transportation officials and other representatives from tribes on matters ranging from enforcement of weight restrictions on state highways to sharing information from industry conferences.

ITA’s Clark stressed in her testimony that increasing federal transportation funding will only help boost such initiatives.

“The recurring federal formula programs at the USDOT … allow tribes to plan and budget based on known appropriation levels to address their transportation priorities,” she said.

“But make no mistake, with sufficient federal appropriations and outreach by our federal partners, tribes can do more,” Clark added. “With sufficient resources, we can grow our economies, reach new markets, retain our tribal citizens, and realize the dream of our ancestors to perpetuate our culture, hold our lands, protect our water and air, and pass down to our children and grandchildren the rich heritage that is our legacy and the legacy of this great nation.”