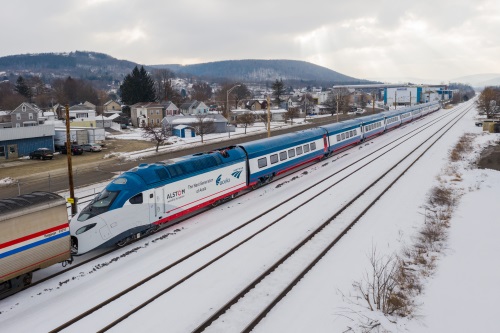 The first of Amtrak’s 28 new Acela trainsets – scheduled to enter service throughout the Northeast Corridor or NEC  in 2021 – are now undergoing nine months of high-speed testing at the Transportation Technology Center near Pueblo, CO. Once completed, those trainsets will return to the Alstom Hornell, NY, factory where they were built for final interior installation work.

[Above photo by Alstom Hornell.]

“Amtrak is proud to celebrate this major achievement for the new Acela fleet program, as we are bringing customers one step closer to enjoying the benefits of these new trains,” said Richard Anderson, Amtrak’s president and CEO, in a statement on February 13.

“With strong demand for Acela travel continuing to grow, we will test the trains to ensure customers will have safe and reliable service with modern amenities when these trains go into service next year,” he added.

Amtrak said it served more than 3.5 million Acela customers in fiscal year 2019, a 4.3 percent increase from FY 2018, and in December had its best ridership month ever with a 16 percent increase over December 2018.

Amtrak noted in a June 2019 statement that it is starting upgrade work on 31 miles of track between Washington’s Union and Baltimore’s Penn stations to enable its trains to operate at higher speeds – part of a long-term infrastructure upgrade for the NEC, which includes realigning track and curves and undercutting and installing new rail to support the deployment of new Acela Express trains in two years.

Amtrak said 2,200 trains operate on the Washington-Boston route each day, with 18.3 million trips made by Amtrak customers on the NEC in fiscal year 2018 alone.