Leadership Change Ahead for Arkansas DOT 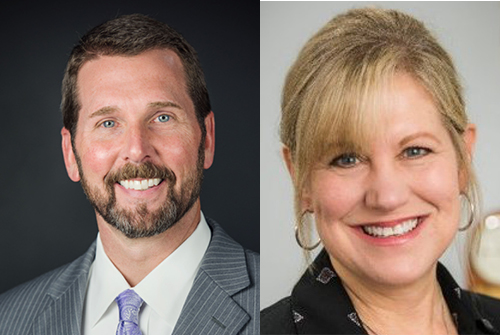 Scott Bennett (above at left), director of the Arkansas Department of Transportation for the last nine years, is retiring from the agency effective March 20. He’ll be replaced by Lorie Harris Tudor (above at right), who will become the agency’s first female director.

“I’ve had a great career at ARDOT, and I’ve been fortunate to be a part of many success stories,” Bennett said in a statement on February 19. “But it’s time for me to step down. I’ve always been told ‘you’ll know when it’s time,’ and I believe that time has come for me.”

Following a special meeting on February 20, the Arkansas Highway Commission named Tudor to succeed Bennett; only the fifth person to serve as the department’s director in its 47-year history.

Bennett – an Arkansas native with a bachelor’s and master’s degree in civil engineering, both from the University of Arkansas – has been with the agency for nearly 32 years. He’s credited with leading the department’s efforts to develop and implement recent voter-approved highway programs such as the 2011 Interstate Rehabilitation Program and the 2012 Connecting Arkansas Program.

Bennett has also performed in key roles for the American Association of State Highway and Transportation Officials, serving as the organization’s secretary-treasurer since 2017 and as a member of its executive committee. He is also currently chair of AASHTO’s Committee on Planning and is a member of the association’s Transportation Policy Forum.

Bennett also receive the association’s highest honor, Thomas H. MacDonald Memorial Award, in 2016 for “rendering continuous outstanding service over an extended period of time”  to the transportation industry – particularly for his success at the time in getting much-needed legislation passed during three consecutive state legislative sessions.

“I’ve been fortunate to have been part of a great team and surrounded by so many capable and talented people throughout my entire career. I am indebted to the Commission, the staff, and so many others who have helped me and supported me all along,” Bennett noted. “Any successes I’ve had have been the result of the efforts of many – I couldn’t and didn’t do this job by myself. It’s been a tough decision to leave, but in my heart, I know it’s the right one.”

Tudor began her 36-year career with what was then the Arkansas State Highway and Transportation Department in 1981 as a clerk typist, leaving the agency in 1995 to attend college; obtaining a Bachelor of Science in civil engineering from the University of Memphis.

She returned to the Arkansas DOT in 1998 as a civil engineer in the agency’s planning branch, eventually becoming assistant chief engineer for planning in 2011.

Since December 2014, Tudor has served as deputy director and chief operating officer for the agency and as vice chair of AASHTO’s Funding and Finance Committee since 2017.