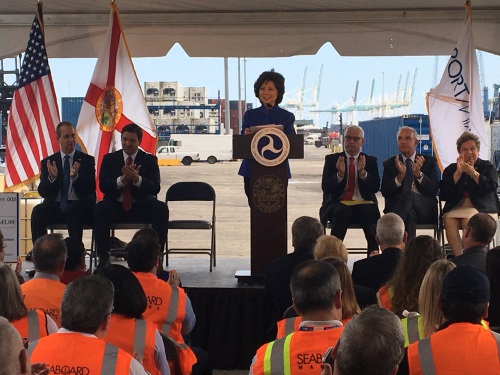 The U.S. Maritime Administration awarded more than $280 million in discretionary grant funding through its new Port Infrastructure Development Program on February 14 to support 15 projects in 11 states, with six of those projects located in Opportunity Zones.

[Above photo by USDOT.]

“Modernizing and improving our ports will pay dividends now and in the future [because] investing in ports is investing in prosperity,” noted Elaine Chao, secretary of the U.S. Department of Transportation, in a speech at the Port of Miami on February 14.

She added that roughly 72 percent of international U.S. trade by weight – valued at close to $2 trillion – moves by water. “So ports are critical to our country’s economic vitality and job creation,” Sec. Chao said, noting that, in addition to Florida, states receiving grants from this round of port funding include Alaska, California, Georgia, Louisiana, Minnesota, Mississippi, Ohio, South Carolina, Texas, and Wisconsin.

“We are very excited to have the opportunity to work more directly with America’s ports to enhance their facilities,” added Mark Buzby, MARAD’s administrator, in a statement. “The grants awarded will ensure that these facilities are operating at their highest, most productive capacities.”

AASHTO Hurricane Panel: Support is the Key to Recovery