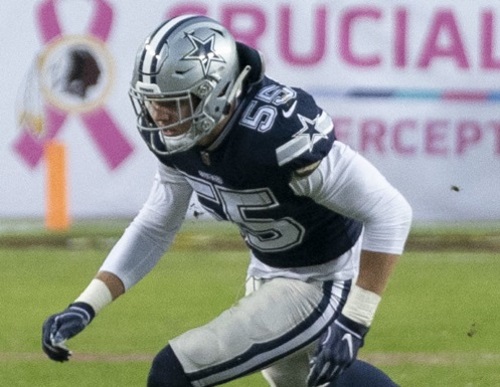 The Idaho Transportation Department is partnering with Dallas Cowboy linebacker and former Boise State football standout Leighton Vander Esch in a safety campaign to promote greater seat belt use across the state.

The new “Rules to LVE By” campaign – launched on February 20 – focuses on the importance of wearing a seat belt at all times while in a vehicle.

“We are thrilled to partner with Leighton on this project,” said John Tomlinson, ITD’s highway safety manager, in a statement. “He believes in hard work and doing things the right way; these are his rules to live by. Wearing a seat belt is one of those rules and we hope other Idahoans follow that example.”

The agency said its statistics show that while 85 percent of people in Idaho buckle up, nearly two-thirds of people killed in motor vehicle crashes were not properly restrained – and the majority of those people were killed on rural roads.

“Having Leighton on board can really make a difference in those rural communities,” Tomlinson stressed. “That’s where he grew up and he really understands the values of a small town but he also has a broad appeal that will resonate with all Idahoans.”

The ITD added in an email to the AASHTO Journal that the basic reason for its partnership with Leighton is because “we are tackling the problem of seat belt use in rural Idaho and he is from a small Idaho town – Riggins. He’s also got a big following in the state, as a small-town kid who made it. He played college ball for Boise State University, so he’s a known commodity locally and, as a Dallas Cowboys linebacker, he’s made the transition to a national audience.”