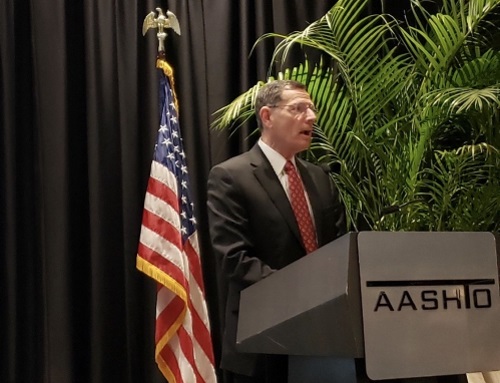 Five key members of Congress who addressed the American Association of State Highway and Transportation Officials annual Washington Briefing on February 26 said that, despite what is expected to be an unusually contentious Presidential election year, they remain hopeful that new surface transportation reauthorization legislation can be passed this year before the current law expires this September.

“It is a [presidential] campaign year; I expect it to be very competitive, costly, and combative,” noted Sen. John Barrasso, R-Wyo., (seen above) chairman of the Senate Committee on Environment and Public Works.

“But it is also a year for trying to get things done in a bipartisan way,” he added. “We need a safe, reliable, and efficient transportation system. So I am committed to getting this done this year – passing surface transportation reauthorization.”

Sen. Barrasso emphasized that President Trump called on Congress to pass his committee’s reauthorization bill – the America’s Transportation Infrastructure Act of 2019 – during the State of the Union speech on February 3. “We have a unique opportunity to get this done,” the senator said. “All Americans deserve a first-class transportation system.”

Rep. Peter DeFazio, D-Ore., chairman, of the House of Representatives Committee on Transportation and Infrastructure, offered measured agreement in his remarks at the briefing with Sen. Barrasso’s outlook on reauthorization.

“No one in this room says our transportation system is not failing and falling apart – all you have to do is look at the congestion on our highways,” Rep. DeFazio said.

“We are not going to do things in the same old way,” he added. “It is time now to take a look at what a 21st century system should be. And while we might have some policy disagreements, we can work through those.”

Rep. Sam Graves, R-Mo., the ranking member on the House T&I committee, concurred with several of Rep. DeFazio’s points during remarks made at a reception that followed the first day of the Washington Briefing sessions.

“Peter and I are committed to getting this done, but politics will play into this – this is what happens during a presidential election year,” he said. “But I am cautiously optimistic we can get this done.”

Rep. Rodney Davis, R-Ill., who is the ranking member on the House T&I Highways and Transit subcommittee, also echoed Rep. DeFazio’s perspective that “while we did not agree with everything” in the Senate EPW reauthorization bill “it is a good place to start.”

“The Senate did a good job; I liked seeing that,” Rep. Davis noted. “Good investments in infrastructure means good communities and thriving communities – and good politics. Because good politics to me is showing our constituents a good use of their tax dollars.”

He pointed out that his subcommittee sports 59 members, making it larger than most Congressional committees.

“But that shows you the level of interest in transportation and why we should be able to get reauthorization done before the FAST [Fixing America’s Surface Transportation] Act expires,” Rep. Davis added.

The real trick will be settling on ways to pay for surface reauthorization legislation explained Rep. Earl Blumenauer, D-Ore., chairman of the House on Ways and Means Subcommittee on Trade.

“I transitioned to Ways and Means [ from the House T&I committee] because we have to find a way to pay for reauthorization; we have to step up and provide the federal funding,” he said. “No one can support infrastructure investment now unless they tell you how they will pay for it; it is past time to do that.”

Rep. Blumenauer noted that state legislatures have stepped up efforts in recent years to pass fuel tax increases and other revenue generation methods to boost transportation funding and that the “men and women who voted for those increases were re-elected at higher rate than those who didn’t; showing that there is no good reason to continue putting more and more of a burden on states and localities.”

In his view, “it is time to bring that to the national level, which is why we must start with raising and indexing the [federal] fuel tax” before other funding mechanisms, such as vehicle miles traveled or VMT fees are brought to the table.

Rep. Davis added in his remarks that transportation funding mechanisms must stop being viewed an “either/or” proposition and encouraged his fellow legislators to look at tapping multiple revenue sources to bolster the Highway Trust Fund.

“We need to think of the HTF as a 401k; about making it less volatile by having multiple revenue sources feed into it,” he said.

“If we do not look at the long-term viability of the trust fund, we are abdicating our responsibility to get a win,” Rep. Davis explained. “When get into debates over raising the gas tax versus going to a VMT, we get nowhere. That’s where diversification comes in. That way, everyone gets a win; we score a touchdown.”