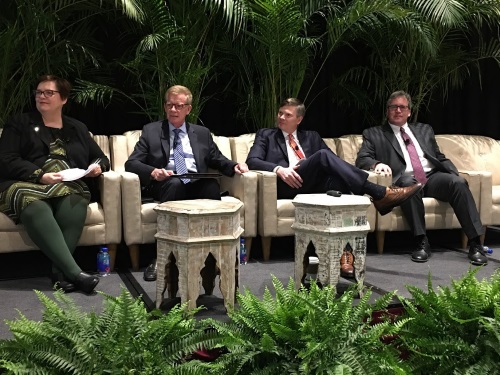 A state and local partner’s roundtable hosted by the American Association of State Highway and Transportation Officials at the group’s annual Washington Briefing on February 27 stressed the importance of providing “win-win” solutions when it comes to solving national transportation issues.

“The challenge we have now in the transportation world is political. Transportation used to be a bipartisan issue in Congress; now everyone is on separate planets,” explained Matthew Chase, executive director of the National Association of Counties. “So what we’re about now is trying to find common ground and we create win-wins for everyone.”

He said that an indication of how severe the infrastructure issue is becoming across the country is that major business groups and chambers of commerce are now the ones pushing for transportation investment, because they realize how transportation impacts economic competitiveness.

“Look at history: Great nations crumble when infrastructure crumbles,” Chase said. “As a transportation community, we have to figure out how we create new wins, restore partnerships, and keep explaining why transportation matters. Because even as my members [municipal governments] deal with transportation funding issues, they are stretched by the need to fund jails, hospitals, schools, etc. It is getting harder and harder to pave roads and fix bridges with those other pressures.”

Tim Storey, executive director of the National Conference of State Legislatures, noted that “predictability and stability” in terms of transportation funding “is what we need to keep hammering home” in terms of outreach to both political leaders and the general public.

Bill McBride, executive director of the National Governors Association, echoed that philosophy – noting that the success of the United States relies on infrastructure, which serves as the foundation of a robust economy.

“Make no mistake: transportation is a top priority of our governors,” he said. “Over 40 governors so far have made state of state addresses, and 90 percent of them mentioned the importance of transportation and infrastructure investment in them.”

McBride added that governors are “the linchpin” of the infrastructure funding discussion as they have the “local knowledge” to guide the best use of federal dollars in their states.

“They are all facing problems [and] while they may have philosophical differences, they will work on bipartisan basis to find solutions,” he said “They are all looking for ways to cut red tape and reduce project delays; examining all ways they can do this without sacrificing safety or environmental protections.”