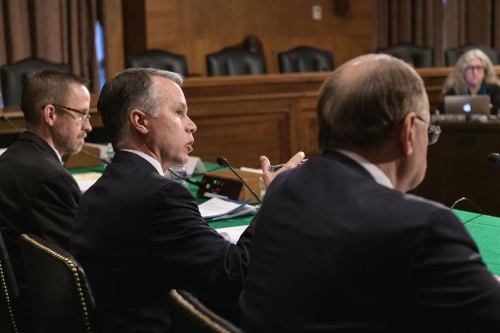 The Senate Committee on Banking, Housing, and Urban Affairs hearing on surface transportation funding issues focused on the fiscal needs of transit systems across the United States and also how those systems help buttress the nation’s economy.

[Above photo via the Senate Banking Committee.]

“State departments of transportation remain committed to assisting Congress in the development of strategies to ensure long-term economic growth and enhanced quality of life through robust investments in public transportation programs and projects,” explained Patrick McKenna (seen above) – director of the Missouri Department of Transportation and American Association of State Highway and Transportation Officials 2019-2020 president – in his remarks at the February 25 hearing.

“We cannot streamline our way into providing a safe and sound transportation system,” McKenna stressed. “We cannot cut our way to buying steel, concrete, asphalt, equipment and labor. We must work together to move transportation policy in the direction of providing safety, service and stability for all.”

Part of that policy prescriptive involves taking a broader strategic look at how transit systems serve the general public, he said.

“We’re trying to be more dynamic in meeting the needs of our citizens,” McKenna noted during the question and answer portion of the hearing.

“For example, access to transit in rural areas helps people age-in-place in our communities,” he pointed out. “Also, in many cases we find in some of our communities – particularly those ringing the outer edge of our major metropolitan areas, like St. Louis and Kansas City – that housing affordability is a difficult issue and access to vehicles is a difficult issue. So it is critical to keep in mind the time and the cost of connecting housing with where people are working, seeking medical treatment, and where they are grocery shopping. That is a critical part of what we are incorporating into our transportation planning.”

Paying for that broader transit scope is the difficult part, noted Sen. Mike Crapo, R-Idaho, the banking committee’s chairman, in his remarks.

He pointed out that, due to falling diesel and gasoline tax revenues, Congress has chosen to transfer general fund money into the Highway Trust Fund to pay for the last several reauthorization bills – with the highway account requiring a $52.8 billion transfer to pay for the 2015 Fixing America’s Surface Transportation or FAST Act, with the transit portion of that legislation requiring an $18.1 billion general fund infusion.

Sen. Sherrod Brown, D-Ohio, the committee’s ranking member, echoed those points in his comments at the hearing.

“The FAST Act provided record level of federal investment in public transportation, but it expires at the end of September, and the amount of backlogged repairs at the nation’s transit systems [has] peaked at $99 billion, according to the most recent U.S. Department of Transportation estimate,” Sen. Brown said. “What do those backlogs mean? More delays when rail cars and buses break down, longer commutes, and more crowded highways.”

He added that a “more balanced transportation system” with “high-quality transit service” can give users a quicker and more affordable trip to and from work, or school or a medical appointment.

“It’s pretty simple – when you have better, faster transit service, more people use it,” Sen. Brown said. “In addition to connecting more workers to jobs, transit reduces highway congestion. Again, it’s pretty simple: when there are fewer people on the roads, those that do have to drive get to work faster. When we build better public transportation, everyone wins.”

Paul Skoutelas, president and CEO of the American Public Transportation Association, added that the stress on the nation’s transportation system as a whole will only become more acute in the near future.

“With more than 16 million additional commuters expected by 2030, U.S. roads will become even more congested,” he explained in his remarks. “Public transit provides a high-capacity mobility alternative. And it saves riders money. APTA estimates that a person who switches his or her daily commute from driving to taking public transportation can save $10,000 a year. Yet, we still have more work to do to provide these benefits and access to opportunities to more communities [as] 45 percent of Americans do not have access to public transportation.”

That’s why public transit advocates, such as Scott Bogren, executive director of the Community Transportation Association of America, believe new funding mechanisms to meet the mobility needs of Americans need to be explored.

“We believe that the wisest path forward is to raise the federal gas tax in a responsible, incremental way while also beginning the transition to more sustainable funding mechanisms like vehicle miles traveled concepts,” he said in his remarks. “VMT concepts must be launched … to take into account electric vehicle usage. [But] these concepts must not disproportionately impact rural parts of the nation where residents must travel further to access work, education, health care and other vital activities.”

“America’s transportation network is a vast and complex system … comprised of roads, bridges, public transit, airports, railroads, seaports, and interchanges affecting thousands of communities, multiple industries, and virtually all job sectors,” added Ed Mortimer, vice president for transportation and infrastructure at the U.S. Chamber of Commerce, in his remarks.

In particular, he noted that “changing travel patterns” underscores the role of public transportation as a critical component of what Mortimer described as the “new mobility landscape” of America.

“Even with the availability of new transportation providers, public transit ridership increased by 21 percent from 1997 to 2017, compared to a 19 percent growth in population over the same period,” he pointed out.

“Without question, this system serves as the backbone of the economy,” Mortimer said. “But America’s surface transportation infrastructure is at a crisis point; much of it was built 60 to 100 years ago. That’s why new mobility options are required – not to just maintain our public transportation system, but to modernize it.”