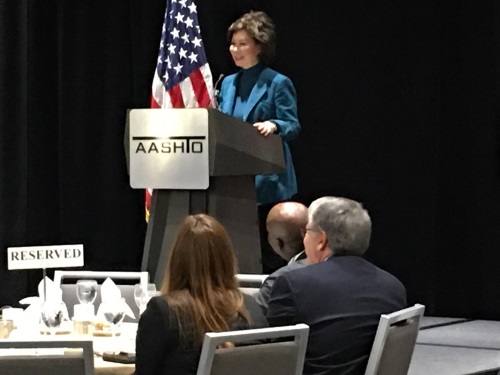 Increasing infrastructure funding – especially in rural areas of America – while continuing to improve national transportation system safety will remain complementary goals for the U.S. Department of Transportation, according to USDOT Secretary Elaine Chao.

During the February 26 luncheon keynote speech at the American Association of State Highway and Transportation Officials annual Washington Briefing, Sec. Chao emphasized that rural America has “long been neglected of infrastructure funding” despite nearly half of all truck vehicle miles traveled occurring on rural roads, with two-thirds of rail freight originating in rural areas. It’s also why the USDOT launched its R.O.U.T.E. Initiative – short for “Rural Opportunities to Use Transportation for Economic Success” – at AASHTO’s 2019 annual meeting last October.

“This cannot continue because not just rural America benefits from this program,” she said. “For instance, almost 44 percent of the vehicle traffic in rural areas originates in urban locations.”

In terms of improving safety, the Secretary noted that USDOT will be placing greater emphasis on reducing pedestrian and bicycle fatalities, which increased in 2018, according to data analyzed by the National Highway Traffic Safety Administration.

As a result, Sec. Chao said that USDOT will be hosting a pedestrian safety summit in April to “provide a forum for identifying best practices and solutions” to help reverse that fatality trend.

Finally, she noted that USDOT will continue to ramp up its anti-human trafficking efforts – highlighting her department’s success in getting 100 transportation industry employers to sign onto the “Transportation Leaders Against Human Trafficking” pledge over the last 98 days.

“The transportation sector is in a unique position to help save victims of human trafficking and we’re seeing every mode of the transportation industry stepping up to stop it,” she said. “It is hard to believe that in a country as wealthy and sophisticated as ours that human trafficking occurs all across the land. But this industry continues to show it is willing to step up and battle back against this horrible crime.”