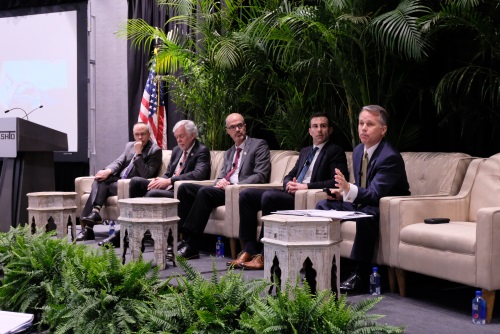 Despite an ongoing downward trend in highway fatalities, state departments of transportation are looking to refocus their safety efforts, including those related to traffic safety culture; collaboration with safety partners; and a more aggressive approach to implementing safety countermeasures regarding infrastructure and behavior.

During a panel discussion held during the American Association of State Highway and Transportation Officials annual Washington Briefing on February 26, several key state DOT leaders emphasized that deaths and injuries from motor vehicle crashes remain too high – representing a “public health crisis” for the nation.

“We’re here because we’re losing 100 souls per day on our transportation system,” explained Patrick McKenna, director of the Missouri DOT and AASHTO’s 2019-2020 president. “Safety is the very basis of transportation [and] that human behavior is the root cause of much of this problem.

He noted, for example, that about 10 percent of the nation’s drivers do not buckle up every day – and those drivers represent more than 50 percent of highway fatalities.

That is one reason why McKenna has made highway safety one of the emphasis areas of his one-year term as AASHTO’s president; continuing the organization’s role in the Towards Zero Deaths and Vision Zero national coalitions while “facilitating a conversation” with member state DOTs and local communities to consider ways to deploy “innovative infrastructure designs and technologies” to more safely accommodate pedestrians, bicyclists, and scooter users.

“This national health crisis does not leave anyone unscathed,” noted Michael Tooley, director of the Montana DOT and the panel’s moderator, regarding the more than 36,000 lives lost on the nation’s highways in 2018. “We need to motivate the public and state DOTs to make radical changes to the safety programs in the nation aimed at helping that number reach zero.”

[Tooley elaborated on those thoughts in an interview with Transportation TV last year.]

One way to do that is by creating “modal opportunities” so people can make short trips without having to use a motor vehicle, argued Roger Millar, secretary of the Washington State DOT.

“Some 40 percent of the trips people make are less than 5 miles,” he explained. “So there is a great opportunity to improve highway safety while reducing traffic congestion by providing more biking or walking space. That frees up capacity on the highway and creates a ‘virtuous circle,’ for as people ride and walk more, they get off the [highway] system and thus crashes and traffic congestion go down.”

Jeff Marootian, director of the District of Columbia DOT, explained how his agency is “reconstructing our largest assets” in order to add in more pedestrian and bicycle connections plus dedicated transit bus infrastructure as many new residents coming into Washington D.C. who don’t own or operate motor vehicles.

“We’re also using data to identify where to deploy our resources and assets,” he added.

For example, traffic fatality data analysis identified 20 intersections with the highest fatality numbers in the city. As a result, DDOT made infrastructure changes – such as adding bump out curbs, dedicated bicycle lanes, and automated traffic enforcement systems such as red-light cameras – that helped reduce fatality numbers at 16 of those 20 intersections.

“Now we’re replicating those strategies across the city,” Marootian said. “We’re focusing our resources on safety in a way we’ve not done before [as] we think there is a critical link between roadway safety and state of good repair. And as we repair and build new [transportation] infrastructure, we focus on making improvements to it by adding dedicated bicycle lanes and bump-out curbs, while working in given locations. It is spawning new ways of thinking around ways to reduce traffic fatalities.”

The Texas DOT is making changes of a similar nature to its roadway infrastructure strategy, noted Marc Williams, the agency’s deputy director. He explained that the Texas Transportation Commission adopted a “road to zero” goal of cutting highway fatalities in half and is putting $300 million toward that effort in fiscal year 2020 with another $300 million to follow in FY 2021.

“Preventing [fatalities due to ] roadway lane departures represents the bulk of those total dollar amounts,” he explained.

“We’re being very deliberate in designing highways and roadways with safety devices incorporated within them: centerline and edge-line rumble strips; upgrades to signs; traffic signal improvements; looking at what we do for pedestrians particularly around school zones; and improving pavement markings,” Williams noted. “We’re also looking at wrong-way driving interdiction initiatives using automated technology as well. All of that is helping us develop a toolkit around how we balance and optimize safety in our roadway design work.”