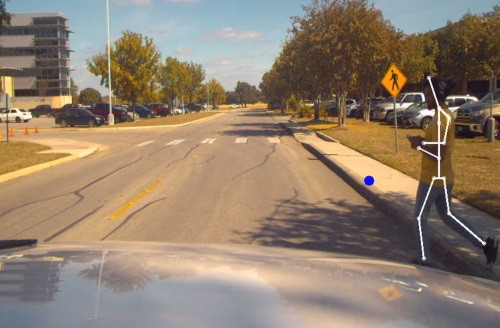 The Southwest Research Institute (SwRI) recently unveiled a motion prediction system to enhance the pedestrian detection of autonomous vehicles; a system based on a “computer vision tool” that uses a “deep learning algorithm” to predict motion via real-time observations of a person’s pelvic area to determine directional changes.

[Above photo by SwRI.]

“For instance, if a pedestrian is walking west, the system can predict if that person will suddenly turn south,” said Samuel Slocum, a senior research analyst with SwRI, in a statement. “As the push for automated vehicles accelerates, this research offers several important safety features to help protect pedestrians.”

He added that although previous technologies could track and predict movements in a straight line, they were unable to anticipate sudden changes. That’s because they relied upon motion prediction generated by “optical flow” algorithms to predict direction and speed based on lateral motion. However, the accuracy of optical flow diminishes when people move in unexpected directions.

“If we see a pedestrian, we might prepare to slow down or change lanes in anticipation of someone crossing the street,” he said. “We take it for granted, but it’s incredibly complex for a computer to process this scene and predict scenarios.”

Such technological developments are taking on greater significance due to growing concern over the safety and reliability of autonomous vehicles, amplified by a significant uptick in pedestrian fatalities.

“Safety and deployment must come hand in hand – we cannot have one without the other,” noted Rep. Frank Pallone, Jr., D-N.J., chairman of the House of Representatives Committee on Energy and Commerce during a February 11 hearing. “Because, ultimately, public acceptance of self-driving cars depends on their reliability and safety. Troubling safety incidents, regulatory black holes, and lax oversight threaten to disrupt this critical balance and the future of this technology itself.”

Jeff Tumlin, director of transportation for the San Francisco Municipal Transportation Agency, echoed that concern at the hearing as autonomous vehicles “must traverse a much more chaotic driving environment” in dense cities.

“We can’t just hope that the industry can dramatically reduce road injuries. We need the industry to prove they can do so in dynamic, urban environments like San Francisco before they are allowed to deploy at scale,” he explained.

“While the autonomous vehicle driving behavior that we witness on our streets appears to be cautious, we can’t be certain whether this is careful driving, or whether the technology is having trouble handling these critical processing tasks,” Tumlin said.

Such concerns dovetail with growing worry over a decade-long uptick in pedestrian fatalities chronicled in a report issued by the Governors Highway Safety Association on February 27.

Jonathan Adkins, GHSA’s executive director, added that – based on his group’s analysis – over the past 10 years, the number of pedestrian fatalities on U.S. roadways has increased by more than 50 percent; accounting for 17 percent of all traffic deaths in 2019, compared to 12 percent in 2009.