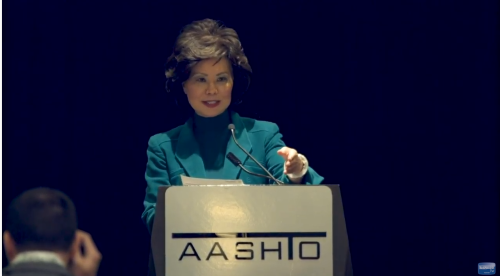 It’s a position she’s staked out since the Federal Communications Commission initiated a rulemaking process in December 2019 to open up that communication band to non-transportation use.

“Among the innovative technologies key to advancing traffic safety are vehicle-to-vehicle and vehicle-to-infrastructure communications. These systems are going to use the 5.9 GHz safety spectrum, which we know is important to you and to us – it is really important to retain this bandwidth for transportation. All of us have talked to the FCC about it. We just cannot give up.”

AASHTO and its members have repeatedly called for preserving the 5.9 GHz spectrum for transportation-only use in letters to the FCC and to Congressional leadership as well since 2019.

The organization’s most recent letter to the FCC, filed on March 2, warned that if the proposed reallocation occurs, the “competitive edge” of the United States in the development of connected vehicle technologies “will be set back” while Europe and Asia surge forward.

“Our goal as a nation should be to lead the world in advancing transportation technology for efficient and safe freight and passenger transportation,” AASHTO said in its March 2 letter.

“While depleting the spectrum for unlicensed purposes may have a short-term economic benefit for [telecommunications] companies, it would absolutely set the United States back by allowing other countries to bypass us and develop more advanced transportation technology systems, crippling our standing in the world economy,” the group noted.

Jim Tymon, AASHTO’s executive director, noted in a 2019 video interview that expanding Wi-Fi usage at the expense of public safety “doesn’t seem to be a good trade off” in this situation.