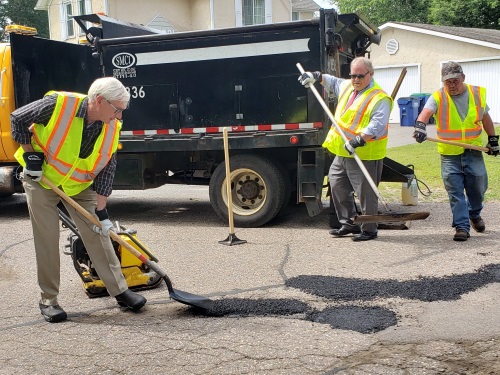 Governor Tony Evers (D) (seen above at left) and the Wisconsin Department of Transportation recently issued two separate sets of grants; one on March 4 that provided $75 million for local transportation projects in 152 communities with the other February 25 splitting $40.5 million between eight harbor maintenance and improvement projects aimed at promoting shipbuilding, waterborne freight activity, and assisting economic development for both the state and local communities.

[Above photo by the Wisconsin Governor’s Office.]

“The local project [funding] will make a real difference in a lot of people’s lives every single day,” noted Craig Thompson – secretary-designee for the Wisconsin DOT – in a statement, adding that the one-time disbursement of $75 million from the state’s Multimodal Local Supplement funding program is being split among 152 projects.

Thompson noted that in January and February, three separate committees comprised of local representatives from counties, towns, cities and villages across Wisconsin met to review the applications. While the program allowed up to 90 percent state funding to any project, the committees choose to increase the local match in order to spread the funds as widely as possible.

“Kids will be able to walk and bike safely to school, it will reduce rush hour congestion, and it will provide businesses along this corridor a welcome economic boost,” he explained.

Meanwhile the $40.5 million being issued via the agency’s Harbor Assistance Program – created back in 1979 – will help harbor communities maintain and improve waterborne commerce.

“Wisconsin has the unique advantage of being surrounded by water on three sides, with a vital commercial port and harbor system,” Gov. Evers said in a statement.

“With the 2019-2021 budget, we committed to investing in this critical asset,” he noted. “These grants strengthen the link between our transportation infrastructure and the success of three critical state industries: agriculture, manufacturing and shipbuilding. Ultimately, it all results in strong communities.”

“The ripple effect of our harbor grants is felt statewide,” added Thompson. “The department makes continued investments in our commercial waterfronts because investing in transportation pays off in our quality of life and in our state’s economic growth and well-being.”

The Wisconsin DOT added that applications for harbor assistance grants are accepted from public or private harbor facilities for projects that benefit facilities used for cargo transfer, ship building, commercial fishing, vessel cruises or ferry service – but all accepted projects must have a transportation efficiency benefit-cost ratio greater than one over a 25-year project life and be identified in a current three-year harbor development plan.