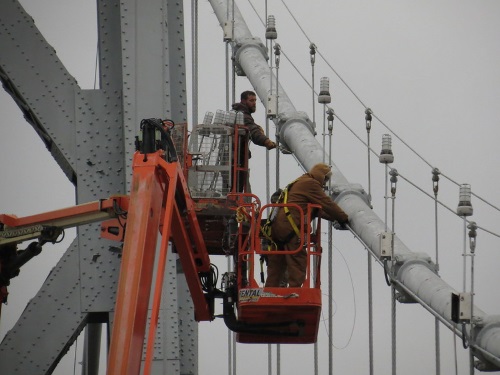 The American Association of State Highway and Transportation Officials filed an 11-page comment letter on March 9 with the U.S. Department of Transportation regarding possible changes to National Bridge Inspection Standards (NBIS) as part of a notice of proposed rulemaking issued by the Federal Highway Administration in late 2019.

[Above photo by the Kentucky Transportation Cabinet.]

For starters, the proposed rule expands the NBIS to some privately-owned bridges – but states do not have the legal authority to access these bridges for inspection, nor the ability to force the owner to have the bridges inspected, the organization noted in its letter.

“Without that authority, states are caught between private property rights and federal regulations,” AASHTO said. “This issue must be addressed before privately-owned bridges can be added to the NBIS.”

Taken as a whole, the increase in mandatory inspection, bridge closing criteria, and the additional reporting requirements within the FHWA’s NPRM pose a “significant increase” in costs to the states, AASHTO pointed out. For example, changes to the AASHTOWare Bridge Management software to incorporate those changes – software used by over 40 states – are estimated to cost millions of dollars; an expense also borne by the states.

“The ‘Estimated Cost of the Proposed Rule’ analysis in no way captures the actual expenditures the states anticipate implementation will require, as well as the future annual costs of the increased inspection and data reporting requirements,” the organization stressed.

“The limited resources of the states’ bridge programs should be focused on repairing the bridges in need of repair instead of gathering data of little use in managing those programs,” it said.

For those and other reasons, AASHTO recommends that the first inspection under the new NBIS regulations be required no sooner than two full inspection cycles – at least 4 years – from the date of the final rule. Additionally – due to the “extensive number of changes” that need to be made to the proposed rule – AASHTO requests that another NPRM be conducted prior to the issuance of the final rule.

“State DOTs utilize their highly constrained resources to repair and maintain bridges to ensure bridge safety and efficient freight movement for the traveling public,” the organization said in its letter. “AASHTO strongly encourages FHWA to carefully consider the absolute need for each change and to balance the perceived benefits to all parties with the impact on the resources need to implement that change.”