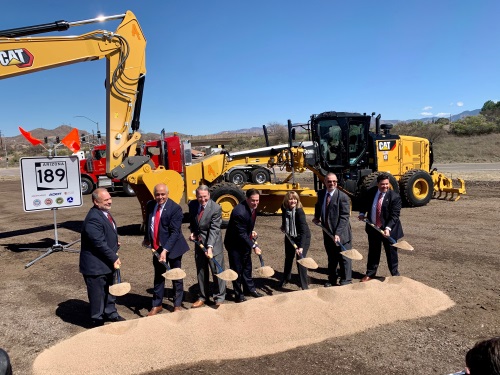 A $134 million project overseen by the Arizona Department of Transportation seeks to improve mobility and safety along a 3.75-mile stretch of Nogales highway – also known as State route 189 – as well as increase international trade coming through Nogales by linking the Mariposa Port of Entry and Interstate 19.

“We know that better roads mean a better future for Arizona,” Governor Doug Ducey (R) said in a statement. “The improvements along State Route 189 will improve safety, enhance trade and foster an even stronger relationship with our neighbors in Mexico.”

The governor – who hosted federal, state, and local officials at a groundbreaking event near the interchange of I-19 and SR 189, known locally as Mariposa Road, on March 4 – noted that project construction is expected to begin in April and take about 18 months to complete.

John Halikowski, director of the Arizona DOT, noted that roadway upgrades include flyover ramps that connect to the interstate; eliminating the need for commercial trucks to stop as many as three times between I-19 and the international border as they travel to and from markets across Arizona and the U.S.

“Moving large commercial trucks to the new flyover ramps will not only benefit the trucking industry but will improve traffic flow and make Mariposa Road safer for all,” he explained, adding that the flyover ramps – which will connect with SR 189 west of Frank Reed Road – will increase safety for students of nearby Nogales High School.

The project also includes a new roundabout at Target Range Road and improved drainage and traffic signals, among other improvements, the Arizona DOT noted.

The Mariposa Port of Entry saw about $24.1 billion in imports and exports in 2018, the agency added, including much of the winter produce consumed in the U.S., with up to 1,800 commercial trucks using SR 189 daily during the winter months.