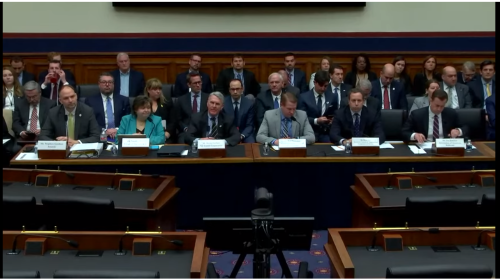 A House of Representatives Committee on Transportation and Infrastructure hearing on March 4 delved into the growing needs of the nation’s freight and passenger rail systems, with Rep. Peter DeFazio, D-Ore. – the committee’s chair – calling for more federal investment in the nation’s railroad networks.

“The freight rail industry packs a punch, operating across a 140,000-mile national network to deliver an average of almost 5 million tons of goods per day [and] freight movements are expected to grow across all modes and will increase 42 percent by 2040,” Rep. DeFazio noted in his opening remarks. “It is critical that our freight rail network is capable of keeping pace with demand.”

He added that while demand for commuter and intercity passenger rail has increased substantially in recent years, Federal investment has lagged in support.

“In order to meet future demands, reduce congestion, and meet a state of good repair, now is the time to invest. That is why I am proposing a $55 billion investment in rail projects over five years in the next surface reauthorization” bill, Rep. DeFazio explained.

Rep. Daniel Lipinski, D-Ill., chair of the House T&I’s Subcommittee on Railroads, Pipelines, and Hazardous Materials, noted that the March 4 hearing “is the last hearing before the final drafting of the surface transportation reauthorization bill” and emphasized that “the need for more grade separations is one of the top issues I hear about from my constituents.”

The subcommittee’s ranking member, Rep. Rick Crawford, R-Ark., added that it is critical to “fairly balance the needs of freight and passenger rail so that each industry may continue to grow in the coming years” as well as “balance the interests of busy urban areas like Chicago with the needs of our rural areas” in his opening remarks.

“Focusing only on a few large, congested hubs ignores the vast rural areas throughout the country that are equally as important to the stability and success of the rail industry,” he explained.

“Amtrak’s 27 state-supported routes – our short-distance services outside of the Northeast Corridor – illustrate both intercity passenger rail’s enormous potential and our nation’s failure to realize it more fully,” noted Amtrak’s Gardner in his remarks.

Yet he stressed that there has not been enough Federal money to develop or significantly improve even a single one of those state corridors, in terms of deploying new equipment or upgrading rail infrastructure.

“Because of lack of funding and a coordinated national effort, we are missing out on enormous opportunities to expand intercity passenger rail service,” Gardner said. “Amtrak could do, and needs to do, a great more than we do today to offer effective connections between communities in heavily populated corridors across America [and] alleviate worsening congestion on highways and our aviation system.”

He also noted that most state-supported routes operate over heavily populated short distance corridors, ranging from approximately 100 to 400 miles in length, and are seeing increased demand.

“Demand for Amtrak in Virginia has been so high that it could easily support doubling the frequency of service we offer today,” Gardner explained. “So, we are going to do exactly that. Amtrak, Virginia, and our host railroad, CSX, have reached agreements that will allow us to double the level of service we provide between Washington and Richmond to near hourly by 2030, and to increase service frequency to both Norfolk and Newport News.”

NJ TRANSIT’s Corbett made a similar pitch regarding the need for more passenger rail-focused federal funding.

“Like almost every transit agency in the country, NJ TRANSIT requires public support, both federal and state,” he said in his remarks.

“The needs and challenges we’re facing are significant, and they’re likely challenges Congress will see more and more. As the U.S. population trend continues to shift from rural to urban settings, more metropolitan areas are competing for transits dollars than ever before – and that trend will only continue.”