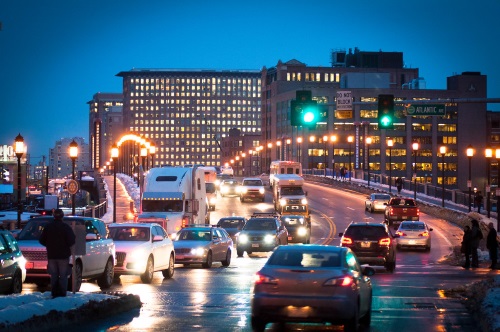 Transportation analytics and connected car service provider INRIX said Americans now lose 99 hours a year due to traffic congestion, costing them nearly $88 billion or an average of $1,377 per year. From 2017 to 2019, INRIX said the average time lost by American drivers has increased by two hours as economic and urban growth continue nationally.

[Above photo of Boston by Sarah Nichols.]

That data – which comes from the firm’s 2019 Global Traffic Scorecard, released on March 9 – also indicated that, for the second consecutive year, Boston ranked as the most congested U.S. city with the average commuter in the metro area losing 149 hours per year to traffic congestion, costing $2,205 per driver in time lost.

“Congestion costs Americans billions of dollars each year. However, it appears to be stabilizing in some of the country’s most congested metros – with delays raising roughly three percent nationwide since 2017,” said Trevor Reed, a transportation analyst at INRIX, in a statement.

“The continued innovation and investment in smarter roadway management is showing early signs of progress,” he added, pointing to increased use of public transit and rising active transportation activity.