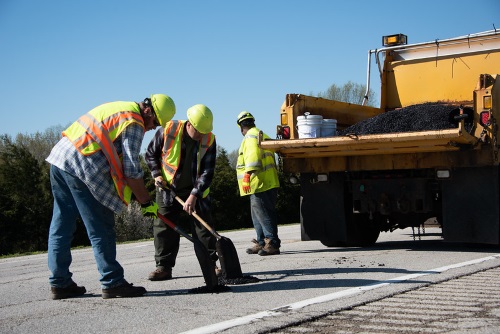 The Missouri Department of Transportation began a roadway pothole repair effort that will last from March through April this year. The agency said some 300 patching crews are being deployed statewide to fix potholes on the 34,000 miles of interstates, U.S. and Missouri routes, and lettered routes it is responsible for.

“We are working as hard as we can to fill the potholes,” noted Natalie Roark, MoDOT’s state maintenance director, in a statement. “Some potholes have to be repaired multiple times because of the additional rain or snow. We ask motorists to please be patient with us as the repairs are being done.”

MoDOT noted that potholes form when temperatures warm up during the day but continue to be cold at night. The rain and snow from winter leave moisture that seeps into cracks and joints in the pavement – and that frozen water in cracks and under the surface of the roadway causes the pavement to bulge and bend.

Then when ice melts, the pavement contracts and leaves gaps or voids in the surface under the pavement – and when cars and trucks drive over the bulging pavement, it weakens the roadway eventually causing chunks of pavement or asphalt to pop out, creating potholes.

MoDOT noted that short-term repairs are made using a cold asphalt mix with a priority to fill the deepest potholes first. The long-term fix requires a hot asphalt mix and that isn’t effective until temperatures remain warm for a prolonged period. The agency added that in 2019 it spent $17 million patching approximately 730,000 potholes.

The New Jersey Department of Transportation, for example, began its annual statewide pothole repair campaign on March 4. The agency added that over the past five fiscal years, has repaired on average 217,645 potholes annually. So far in fiscal year 2020, the New Jersey DOT said it has repaired about 116,025 potholes.