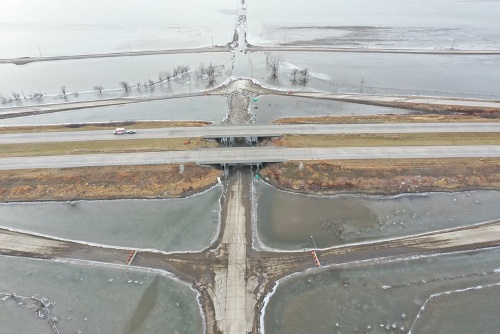 In a joint statement, the two agencies said some areas in their respective states may be more vulnerable to flooding this year due to the severity of the flooding experienced in the spring of 2019.

Because of the work that has been done over the last year, travelers in the two states should be cautious that flooding impacts will not be the same as they have been in the past, the two state DOTs said.

Levee repairs – by both the U.S. Army Corps of Engineers and local levee districts – and roadway improvements, especially to Interstate 29 and Iowa 2 on the Iowa side, will impact how floodwater flows in these areas compared to the flooding last year.

Nebraska Dot and Iowa DOT added that they are “coordinating regularly” on improvements that have been made to each state’s transportation system following last year’s flooding.

This includes specific projects on roadways connecting the states like Nebraska/Iowa Highway 2, U.S. 34 and Interstate 680. Other projects have provided strengthening to shoulders and roadsides, especially on I-29 and I-680, that may help keep roads open longer and increase the ability to re-open roads sooner should flooding occur in these areas again this spring, they said.

Both added that five new flood sensors have been installed in areas where potential flooding is anticipated during the spring of 2020; sensors that provide better information about river levels in key areas, allowing for emergency materials and equipment to be moved into place earlier than in the past.