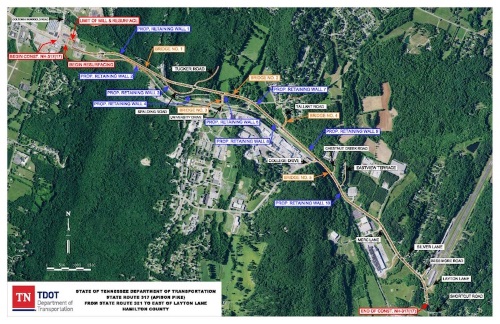 The Tennessee Department of Transportation hosted a ground-breaking event on March 13 to kick off the start of a $93.1 million project to widen a 3.4-mile-long section of SR-317, known as Apison Pike.

[Above graphic via the Tennessee DOT.]

Expected to be completed on or before June 30, 2025, the project aims to expand the roadway to five lanes with curb and gutter, sidewalks, bike lanes and greenway connections. Much of the project will be constructed on new alignment, including a large bridge that will span the railroad tracks, the Tennessee DOT noted.

“We are excited to begin this important project in conjunction with our federal, state and local partners and the citizens of Collegedale,” said Clay Bright, the agency’s commissioner, in a statement.

“Once complete, this project will improve accessibility for local and regional traffic and enhance safety in the area,” he added. “Having a large bridge over the railroad tracks will eliminate the necessity for traffic to use the at-grade crossing, thereby making travel times much more predictable.”

Clay noted that this project is funded through the IMPROVE Act, introduced in 2017, with more development planned for the Apison Pike down the road – including a project that will widen a 0.9-mile section of that road to three lanes plus build bike lanes and sidewalks.