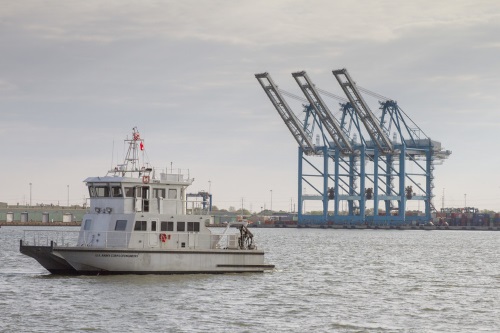 A spate of reports indicates that the Coronavirus pandemic is slashing gross domestic growth rates worldwide, and where the United States is concerned, that’s increasing the financial risks associated with revenue-backed infrastructure projects such as airports, toll roads, and ports.

[Above photo by the U.S. Army Corps of Engineers.]

“The level of world GDP is falling. For all intents and purposes we are in global recession territory,” said Brian Coulton, chief economist at Fitch Ratings, in a recent statement. “We have nearly halved the Fitch baseline global growth forecast for 2020 to just 1.3 percent from 2.5 percent in December 2019. That revision leaves 2020 global GDP US $850 billion lower than in the previous forecast. But we could very easily see an outright decline in global GDP this year if more pervasive lockdown measures have to be rolled out.”

He added that Fitch’s baseline forecasts do not yet assume that full-scale lockdowns take place across major European countries or the United States. So far, the baseline forecast for U.S. GDP growth is 1 percent in 2020 compared with a pre-virus outlook of 2 percent – though U.S. GDP is expected to rebound to 1.9 percent in 2021.

Airports and toll roads are expected to feel the impact of this steep drop in economic growth the most, Fitch noted in a separate series of reports.

“Fitch expects the dramatic reduction in global travel demand to increase financial pressure on airports at varying levels, a sector that has had a decade long stretch of traffic expansion and financial stability,” the firm noted in a March 24 report.

“The drop in air travel is likely to be steeper than what was seen during the Severe Acute Respiratory Syndrome outbreak or even after the Sept. 11th terrorist attack,” Fitch said. “Airlines across the globe have taken capacity reduction actions while governments have restricted or strictly controlled travel movements at unprecedented levels.”

“The precipitous drop in aviation activity of all kinds is leading to a corresponding drop in revenues for all types of airports, both commercial and general aviation,” the organizations said in their joint letter. “These revenue losses will make it more difficult for airports to afford their debt payments and continue to meet their operational needs in keeping the airways open for vital commerce and transportation of goods, services, and people.”

AASHTO and NASAO added that an “immediate injection of funds” is vital to helping airports continue critical operations and adjust to future realities. “As Congress acts it is important to remember the critical role that general aviation airports play, many of which connect rural and remote areas to the national aviation system,” they said.

Where toll roads are concerned, Fitch said it is in receipt of recent data showing commuter traffic losses commonly ranging from 50 percent to 60 percent; dwarfing peak traffic losses of 7 percent and 14 percent for large and small toll networks, respectively, during the Great Recession of 2008.

“As a result of these unprecedented declines, some toll systems have already requested emergency cash infusions from state and federal authorities, suggesting liquidity will be tested,” the firm noted. “The outlook for economic and traffic growth carries with it an atypical degree of uncertainty as the ultimate severity and duration of the health crisis is unknown.”

Moody’s Investor Service concurred in that outlook in a global infrastructure report it issued on March 23, noting that the coronavirus pandemic is “putting local governments at an increased risk of credit downgrades on revenue-backed infrastructure projects for airports, stadiums, convention centers, toll roads, and ports.”

Yet Moody’s added that public-private-partnerships in the U.S. and Canada – an increasingly popular type of arrangement to fund public infrastructure – are confronting “low exposure to coronavirus,” according to the report as such fiscal arrangements, “including availability-payment based hospitals, roads and social infrastructure” generate revenue “based on availability and performance with no demand risk exposure.”

Still, where ports are concerned, Fitch said the Coronavirus pandemic is having “sizable and wide-ranging effects,” both through disruptions to supply chains and government-imposed restrictions on individuals, businesses, and corporations alike.

“The former directly affects cargo port volumes, while the latter affects both cruise port passengers and the broader consumer demand that drives imports and exports,” the firm said. “Economic effects of the coronavirus are expected to generate throughput and passenger declines along with financial stresses well in excess of what we expect under typical recessionary conditions.”

Fitch added that expects to have a more detailed report on the Coronavirus impact on ports ready by March 30.