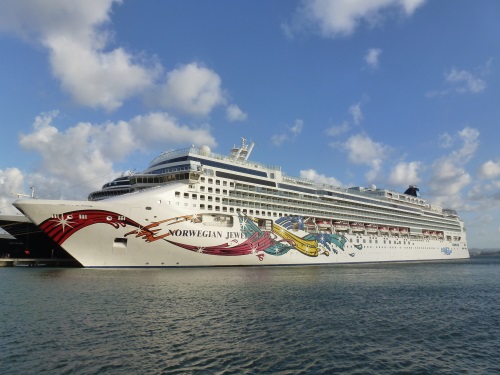 The Hawaii Department of Transportation along with other federal, state, and private sector agencies, solved a thorny logistical problem that began on March 22 when a Norwegian Cruise Line (NCL) vessel carrying 2,000 passengers developed propulsion issues and had to unexpectedly make port for repairs.

[Above photo of the Norwegian Jewel via Wikipedia.]

“Due to the mechanical issues on the ship the passengers had to be allowed off the vessel,” explained Jade Butay, Hawaii DOT’s director, in a statement.

After the Norwegian Jewel cruise ship docked in Honolulu Harbor on March 22, all passengers were screened by U.S. Customs and Border Protection agents; a process that included enhanced medical screening, including a temperature reading, medical questionnaire review and travel history verification. Medical doctors and paramedics were on scene to provide additional evaluation to any passengers who appeared symptomatic, Hawaii DOT said.

Passengers who were Hawaii residents were shuttled by bus from the harbor directly to their residence, where they began a 14-day self-quarantine period. Residents of neighboring islands were flown on a chartered flight to their home airport to begin a similar process.

Meanwhile, Hawaii DOT coordinated chartered buses which took other passengers to Daniel K. Inouye International Airport (HNL) where they boarded aircraft chartered by NCL to return to their home cities, including, among others: Los Angeles; London; Frankfurt, Germany; and Sydney, Australia. Throughout the entire process, they were completely separated from other travelers not associated with the cruise ship, the agency said.

Meanwhile, the roughly 1,000 crewmembers staffing the Norwegian Jewel will stay on the ship until further notice, the Hawaii DOT said.

The agency added that cruise ships are on a 30-day pause in operations that took effect on March 14, but the Norwegian Jewel was already underway and had not planned to travel to the United States.

“My focus is about keeping everyone safe, from our community to people in distress like the passengers on the Norwegian Jewel. We are happy to assist in these dynamic and challenging times,” said Hawaii Governor David Ige (D) in a statement.

“I would like to thank NCL and the Hawaii DOT for its partnership and work chartering buses and flights and ensuring everyone stays safe and gets home,” he added.