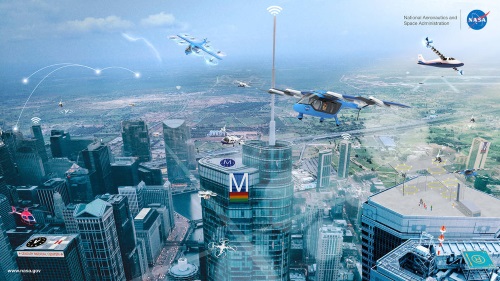 The National Aeronautics and Space Administration is changing the terminology it uses to describe the burgeoning urban air mobility market to reflect a “more comprehensive view” of the technology, systems, and practices on the horizon.

[Above graphic by NASA.]

“To be clear, in this move we’re primarily talking about updating the words we are using to describe our efforts. We are still doing Urban Air Mobility or UAM work, but now we consider it part of a bigger picture we call Advanced Air Mobility or AAM,” explained Davis Hackenberg, NASA’s AAM mission manager, in a statement.

“We are embracing a more inclusive vision for the future of air travel [and] we’re just going to use a name that makes more sense to reflect that,” he added.

He said the emphasis of flying drones over larger cities “naturally branded” such activity as part of the Urban Air Mobility sector – and it stuck. “This was late in 2017, but it didn’t take long before we got the sense that maybe ‘urban’ wasn’t the perfect word,” Hackenberg pointed out.

As interest in the potential of UAM exploded around the world, and NASA continued to lead discussions and host technical demonstrations with its industry partners, he said it became clear to everyone there was “much broader interest” in UAM capabilities that could benefit everyone – not just those who live in a big city.

This thinking was most recently emphasized in a recent report by the National Academies of Sciences, Engineering, and Medicine report entitled Advancing Aerial Mobility – A National Blueprint, Hackenberg noted.

“Their decision to use the word ‘advanced’ instead of ‘urban’ was intentional and echoed the view that UAM is more than just for urban dwellers,” he emphasized.

Moving forward, NASA said its UAM-related work will continue as a subset to its overall AAM mission, which has defined two categories of operations based on the distance planned to be flown: local and intra-regional.